Army Hqs. instructs to stop the usage of Term 'PBOR'.

1. The abvn/acronym 'PBOR' does not exist in the 'Staff Duties in Fd Appx 'C' - Abbreviation 2006'. However, over a period of time incorrect usage of this term PBOR has become a practice. It is seen and reported by a Comd HQ that the acroym 'PBOR' is being wrongly used in respect of 'JCOs and OR'.

2. The issue has been considered at the IHQ of MoD(Army). It has been decided that the acronym 'PBOR' will not be used, instead 'JCOs and ORs' is to be used in all the letters/comns.

3. The above instr may be disseminated to the envt for compliance.

The Govt, after the 5th CPC, had brought disabled defence personnel at par with civilian disabled personnel and had abrogated the minimum 20% requirement for earning a disability element for those personnel who were invalided. The reason for this was that normally it is not expected from the authorities to invalid out personnel with disabilities less than 20%, hence the govt had taken a considered decision that if such a situation arose then such invalided personnel shall be given the benefit of disability element with rounding off to 50% even if the disability was 01%.

This becomes clear from the heading of Para 7 and Para 7.2 of Govt of India, MoD Letter dated 31-01-2001 which provides that disabilities ‘less than 50%’, (that is, without any minimum criterion of 20%) would be reckoned as 50% for disability element purposes. Further the heading of Para 8 read with Para 8.1 and more particularly Para 8.2 clearly stipulate that in cases of individuals retained in service (and not invalided), no disability element shall be paid for disabilities below 20%. This condition of minimum 20% has only been imposed in Para 8 (retirement / discharge cases) and not in Para 7 (invalidation cases).

Posted by GaviniVN at 10:42 AM No comments: Links to this post

Sub: Grant of FMA to the AF Pensioners Residing in area not covered under ECHS

The undersigned is directed to refer to the Govt. of India, Ministry of Defence letter No. 1(1)/98/D (Pen/Sers) dated 15th June, 1998 regarding grant of Fixed Medical Allowance (FMA) of Rs.100/- p.m. to Armed Forces Personnel/Family Pensioners for meeting expenditure on the day medical expenses that do not require hospitalization unless the individual opts for OPD treatment in AF Hospitals/M.I Rooms and convey the sanction of the President for enhancement of the amount of FMA from Rs.100/- to Rs.300/- The other conditions for grant of FMA shall continue to be in force.

Posted by GaviniVN at 8:44 PM No comments: Links to this post

War widow was getting Rs. 70 a month as pension

New Delhi: The Centre today told the Supreme Court that the monthly pension of a 90-year old war widow has been enhanced to Rs. 18,000 from a pittance Rs. 70 and a proper mechanism is being evolved to address the grievances of ex-service personnel at their "doorsteps".

The widow Pushpavanthi, through counsel Ramesh Haritas, had earlier complained that she was getting Rs. 70 as family pension on behalf of her late husband Major Dharam Chand who died in 1967 at the age of 42. Appearing for the Centre, Solicitor General Gopal Subramanium told a bench of justices Markandeya Katju and B S Chauhan that the government was fully concerned with the welfare of the armed forces and greatly valued their contribution to the nation. The counsel said the government had enhanced Pushpavanthi's pension to Rs. 18,000 after she moved the apex court.

He told the bench that there was no need at the moment for setting up any separate commission to address the problems of ex-servicemen as the defence department has separate welfare wings at the district level to tackle the grievances. The court had earlier mooted the idea of a separate commission to deal with the service-related problems of army personnel both serving and retired as courts were flooded with such complaints.

The Solicitor General said the government was in the process of formulating a suitable mechanism to ensure that the grievances of the ex-servicemen are addressed at their doorsteps instead of compelling them to visit the headquarters for the same.
================================
(SOURCE-PTI)
Posted by GaviniVN at 6:54 AM No comments: Links to this post

HARYANA FAVOURS ONE RANK ONE PENSION SCHEME FOR EX-SERVICEMEN

Bhiwani (Haryana), Feb 5 (IANS) Haryana Chief Minister Bhupinder Singh Hooda Saturday said that his government was in favour of one rank, one pension scheme for the ex-army personnel. 'I had also advocated this issue in parliament when I was an MP. The union government has taken a number of steps in this direction,' said Hooda, while talking to reporters at an Army Mela here. The two-day 'Army Mela', which is being organised by the Indian Army, was inaugurated at Bhim Stadium here Saturday.

Speaking on the issue, Army chief Gen. V.K. Singh, who was also present, said: 'The centre is consid-ering the issue. The one rank, one pension norm has been achieved for JCOs and soldiers, up to 90%  ranks, while the issue regarding officers is under consideration.'

Comparing the strength of Indian defence forces with China, Singh said that Indian soldiers are matchless. 'Defence forces are not evaluated on the basis of numbers only, other factors like morale, physical efficiency, courage and enthusiasm are also important,' he noted
==============================
(SOURCE-SIFY NEWS)
Posted by GaviniVN at 6:46 AM No comments: Links to this post

ONE RANK ONE PENSION UNDER CONSIDERATION

BHIWANI/CHANDIGARH: The Chief of the Army Staff ( COAS), General VK Singh, has informed that the demand of one rank for one pension (OROP) for officers is under serious consideration. He added that the OROP for other ranks has been almost accepted. General Singh was in his hometown Bhiwani in Haryana on Saturday to attend the 'Army Mela' organized by the South-Western command. He also informed that the army authorities have chalked out a proposal for the restructuring of the force and to bring more transparency in it. On the Adarsh scam, the General assured that enough steps have been taken by the army to ensure that such incidents are not repeated in future.

The two-day mela was organized at Bhim Stadium, Bhiwani under the theme, "Indian Army - Nation First Always and Every Time." Speaking on the occasion, Gen Singh said that the Army has declared the year 2011 as the 'Year of the Disabled Soldier'.

A large number of initiatives have been launched for the well being of those army men who have suffered disablities including allotment of Rs 1 crore for upgradation of infrastructure, rehabilitation and training of quadriplegic and paraplegic patients, financial assistance of Rs 25,000 for widows of army men for higher education, one time financial assistance of Rs 20,000 to those who have suffered amputations for modification of their bathroom, education grant of Rs 400 per month per child for a maximum of two children for those who suffered fatal injuries and demise grant for the next of kin of retired JCOs & OR has been enhanced from Rs 3,000 per individual to Rs 5,000 per individual with effect from January 15 this year.

General Singh, who hails from Bhiwani informed that a large number of directions have been issued towards improvement of facilities for soldiers of Bhiwani including relocation of unit run canteen and a new building for ECHS (Ex-servicemen contributory health scheme). Bhiwani district alone has about 35,000 Gaurav Senanis, a sizeable strength of 'Veer Naries' and 25,000 serving officers, JCOs and other ranks in the Indian Army.

The Rajya Sainik board and the pension liaison cell, Allahabad too had set up their awareness stalls to redress the grievances of retired soldiers. Haryana chief minister, Bhupinder Singh Hooda was also present on the occasion and thanked the army for organizing such big event in the state.
===========================
(SOURCE-TOI)
Posted by GaviniVN at 8:43 PM No comments: Links to this post

ONE RANK ONE PENSION 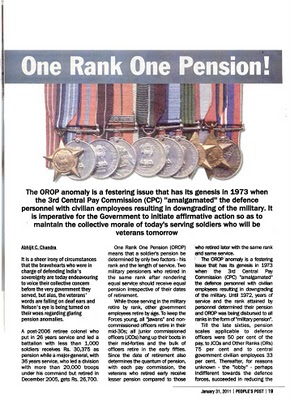 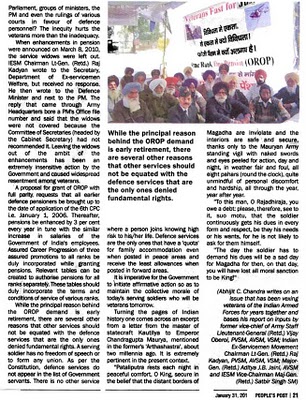 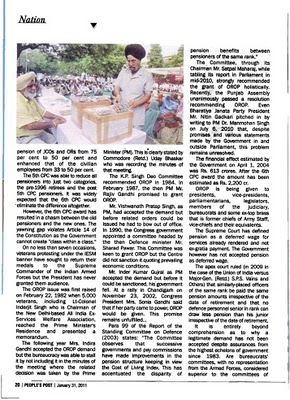 (SOURCE-IESM BLOG)
Posted by GaviniVN at 2:09 PM No comments: Links to this post

PAY EQUAL PENSION TO ALL THE LIC RETIREES : HC

REJOICE VETERAN BROTHERS, WITH THE FOLLOWING ORDERS OF RAJASTHAN HIGH COURT, OUR CASE FOR OROP STANDS GOOD CHANCE OF SIMILAR APPLICABILITY:-
===================================
Jaipur, Jan 24 (PTI) The Rajasthan high court has come down heavily on the "inaction" of the Life Insurance Corporation of India (LIC) for not adhering to its board resolution to pay equal pension to all the retirees across the country irrespective of their date of retirement.

The division bench of Justices Dalip Singh and Mahesh Bhagwati directed LIC to give effect to its board decision dated November 24, 2001 to revise the pension and Dearness allowance ( DA) payable to its retired employees corresponding to the successive revisions of the pay scales that took place in 1986, 1993, 1997, 2002 and 2007 respectively.

The court verdict is bound to effect thousands of retired personals of LIC across the country.

(SOURCE - PTI)
Posted by GaviniVN at 1:06 PM No comments: Links to this post

THE TERM "PBOR" BEING REMOVED FROM MILITARY WRITING

Today at Signals Vatika, New Delhi, during the Centenary Celebrations of Corps of Signals, Brig Lakshman Singh, Signals Veteran, introduced me to a serving General Officer from Army HQ, who confirmed that Army HQ has issued a letter ordering discontinuation the use of the word “PBOR”.

The General Officer has very kindly agreed to forward the scanned copy of the Army HQ letter on Monday, 7th Feb 2011 to Brig Lakshman Singh. As soon as the letter is received I will circulate it to you all.

In service of Indian Military Veterans