DOPT : Items proposed by the Staff-Side, NC(JCM) for discussion in the National Anomaly Committee

F.No.11/2/2016-JCA-I(Pt.)
Government of IndiaMinistry of Personnel, Public Grievances & PensionsDepartment of Personnel Training
North Block, New DelhiDated the 30th October, 2017
To
Shri Shiv Gopal MishraSecretary, Staff-Side National Council,JCM 13-C, Ferozshah Road,New Delhi-110001
Subject:— Items proposed by the Staff-Side, NC(JCM) for discussion in the National Anomaly Committee — Comments of DoPT regarding.
Sir,
I am directed to refer to your letters no. NC-JCM-2017/7th CPC Anomaly dated 16th August, 2017 and 31th August, 2017 with which a total of 18 items have been sent to DoPT for discussion in the NAC meetings. These 18 items are about various issues over which, the Staff-Side has opined, anomaly has arisen as a result of the 7th CPC’s recommendations or absence of them.
2. On the other hand, DoPT after examining them in the light of the three postulates which, as described in DoPT’s OM. No. 11/2/2016-JCA dated 16th August, 2016 and 20th February, 2017, would constitute anomaly is of the view that there are certain items in the lists sent which are not in accord with them and hence cannot be called anomalies as such notwithstanding the merit that they may have otherwise. There are also certain items which should be taken up at the Departmental Anomaly Committees of the other administrative Ministries concerned. A few items are those which, for a detailed examination, need more relevant documents/papers etc. These have been briefly described below:

3. Items to be taken up at the Departmental Anomaly Committees.

4.       Item to be taken up separately with the Department of Pension.

Yours faithfully,
S/d,(D.K. Sengupta)
Deputy Secretary to the Government of India

Posted by GaviniVN at 11:30 AM No comments: Links to this post

During the last 2 – 3 months both print and electronic media are continuously reporting that increase in 7th CPC Minimum Pay and Fitment Factor is under serious consideration of the Govt. and National Anomaly Committee will give its recommendation to Govt. and orders for increased Minimum Pay and Fitment Formula will be given effect from April 2018.
We are reproducing below a letter from Govt. dated 30.10.2017 addressed to Secretary, Staff Side , National Council JCM stating that the demand for increase in Minimum Pay and Fitment Formula will not come under the purview of National Anomaly Committee.
Further Govt. has not yet constituted the HIGH LEVEL COMMITTEE for increasing Minimum Pay and Fitment Formula as assured by the Group of Ministers including Home Minister Sri Rajnath Singh, Finance Minister Shri Arun Jaitley on 30.06.2016.
The so-called Senior Officers Committee has also not discussed this agenda even though staff Side has repeatedly demanded discussion and settlement as per the assurance given by Senior Cabinet Ministers. Now 17 months are over.
32 lakhs Central Govt. Employees and 33 lakhs Pensioners are being continuously betrayed by the NDA Govt.
M. Krishnan
Secretary General
Confederation
Mob. & Whats App: 09447068125
Email: mkrishnan6854@gmail.com

Click here to view – DOPT Letter
(Source – http://confederationhq.blogspot.in )
Posted by GaviniVN at 11:26 AM 5 comments: Links to this post

One Request! ....Kindly have patience!

The DAV had advised all Air Force pensioners to forward their option forms for reopening of their pension cases subsequent to the issue of the letter about the implementation of the recommendations of the 7PCC.


Many of you have already already sent these through the emails, while others have sent their forms through India post along with the required attachments. The DAV has published lists of the people whose forms have been received and this can be seen on their website. These lists are being revised every Friday.

Once posted, most of you have been calling up the DAV telephone number to confirm the receipt thus literally jamming up all their numbers.

All the mails/ the emails, received are being processed and hard copies getting placed in individual files. Some cases cannot be processed for lack of correct documents.

Please ensure that you have actually sent these documents (hard copies) as enclosures (self attested photo copies) with the signed option form:-

-Your own and your spouse's Aadhar cards (both sides),

- the PAN cards for both of you,

-a crossed out blank cheque leaf connected with your pension bank account ,

- your initial PPO where the name of your wife is duly appended or a corrigendum PPO which you may have received incorporating any corrections that you may have asked for post your retirement,

This whole exercise is a massive task and the pensioners are requested to have patience.


The AFA is closely monitoring the progress and and further development will be duly reported through these pages.

Subject: Revision of Pension/Family pension in respect of Pre-1990-reg.

I am the Central Government Pensioner/my spouse retired from the above cited Central Government Department. I hereby apply for revision of my pension/family pension in terms of the Government orders cited above. My details are as under:
1. Name2. Designation on retirement3. Date of Retirement4. Pay & Pay Scale on retirement:5. PPO No.(Photo copy of PPO Book enclosed):6. Bank Account details(Name of Bank/Account No./lFSC code:)7.Present Address:8.Contact No.(Land Line/Moblile No./Email ID): 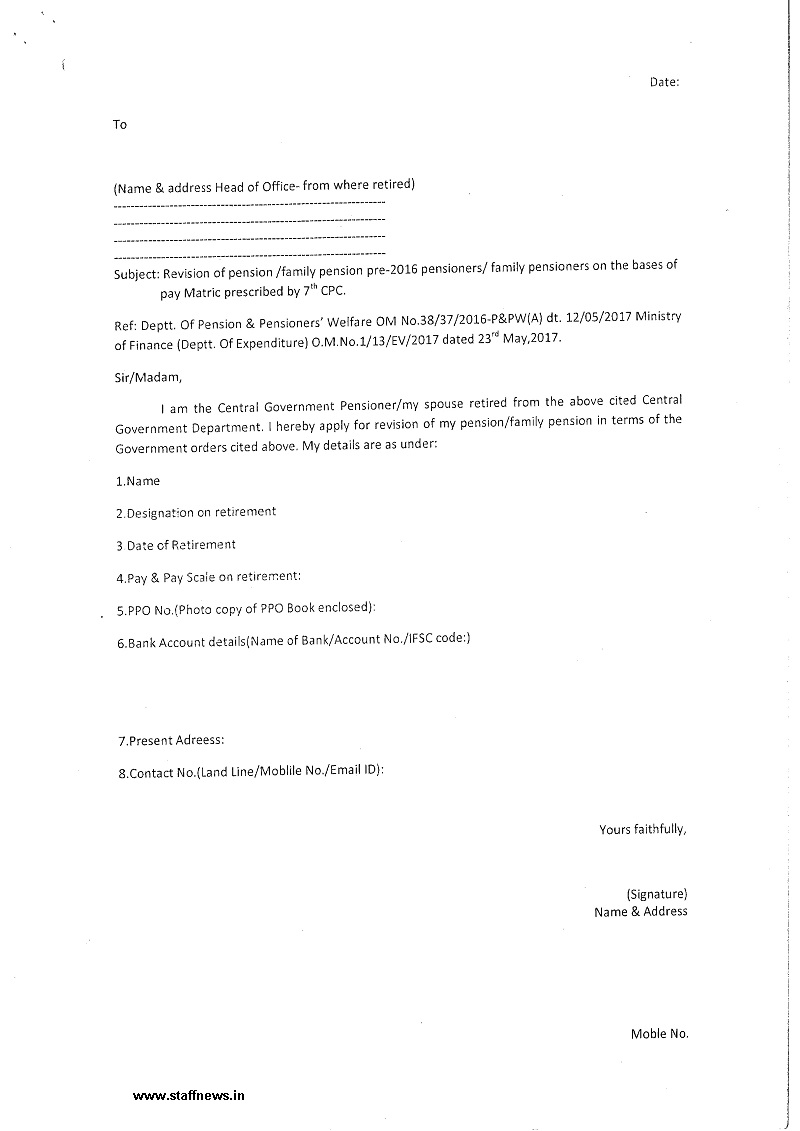 MAJ GEN SATBIR SINGH (RETD) CHAIRMAN IESM MEETS RM TODAY 15 NOV 2017 IN HER OFFICE IN SOUTH BLOCK ...IN A CORDIAL AND POSTIVE.. ATMOSPHERE.  MEETING LASTED ABOUT 30 MIN.. GEN SATBİR BROUGHT THE FOLLOWING. TO THE NOTICE OF THE RM..
*   Actual OROP as approved by Two Parliaments.

* As per Approved Definition again By Two Parliaments. MOS Def gave out the same Definition on 02 Dec 2014 in Parliament.

*  Implemented OROP has four Anomalies which need to be corrected.

THE RM ASSURED OF NECESSARY ACTION AT THE EARLIEST.

(SOURCE- VIA GROUP E-MAIL)
Posted by GaviniVN at 9:38 PM 5 comments: Links to this post

A VERY POSITIVE AND HEARTENING VIEWS FROM A SOON TO BE A VETERAN WHO ATTENDED RETIRING OFFICERS SEMINAR HELD AT SOUTH BLOCK..13 NOV 2017.

*Douglas McArthur once said*:
“ A true leader has the confidence to stand alone, the courage to make tough decisions, and the compassion to listen to the needs of others. He does not set out to be a leader, but becomes one by the equality of his actions and the integrity of his intent.”

I am Col. V.S. who will be leaving this great army after a fortnight with pride on my chest and praise for my Army on my lips. While today, actually, neither am I too happy nor disgruntled  at the state of affairs of our great army . But sitting in South Block, I realised that things are not that bad either. I am sure the likes of Gen Bam will endorse my views which I am going to share now.
*Rank parity or the Equivalence Issue.* I must confess that the chief clearly brought out that certain oversights/ anomalies/ mistakes done by the service headquarters in the past are being addressed in the right earnest now and amended in the present time frame. Letters of 2006 and 2008 vintage have already been cancelled. The issue of JCO being a gazetted officer has also been clarified and letter cancelled. Things are being looked into at the highest level and even the RM has assured full support in this regard.
*NFU.* The chief talked in great detail about Gp A , Gp I and all India Services and mentioned vehemently that, we are a different service and no comparison with any of  these are warranted and will not be in our favour. Ours is a pyramidical structure and we should therefore not try to compare and group ourselves with them. Our terms and conditions of service are very challenging and difficult . This fact is very clear to all and therefore we should not unnecessarily bother about it as we deserve the NFU more than anyone else.
*Pay Commission and MSP .* Our habit of categorising JCOs and ORs together and calling them as JCO/OR in our daily parlance has landed the JCO with same MSP as Jawans. He felt that JCOs MSP in any case should be much more than Jawans. We should therefore, desist from using loosely coined terms as they have a major ramification. He also said that there was a need to address the issue of lesser Pay and Pension accrued due to MSP of Maj Gens & Lt Gens in comparison with Brigadiers. This anomaly needs to be addressed  and steps are already underway to address these important issues.
*Restoration of rations*. The chief categorically mentioned that the government is saving just about Rs.4 crores only after stopping rations in kind for officers in peace stations. In all probability the government will take a decision and reconsider to restore ration for officers in times to come in peace stations. This would dispel all rumours in the environment.
*Personal weapons for Infantry.* He said that if we analyze, just about 2 lakh personal assault weapons are required for Infantry and Mechanised Infantry, the rest may do good with weapons like AK 47 which is as it is most effectively being used by us and other forces for specialised purposes all over the world.
It's truly heartening to see that todays retiring officer have taken an informed and measured view of factual data and exuded a lot of positivity.

I think would be highly inappropriate on my part to not share such positive vibes among brothers  in uniform who are being snogged by a lot if vicious rumours and misgivings  by means of great doses if misinformation.

The spreading rumours and bashing the hierarchy must stop (which more often than not is based on rhetorics and vitiated emotions than facts and logic). Thanks .”_*
Recd from friends in South Block
Col NK Balakrishnan (Retd)

(SOURCE-VIA GROUP E-MAIL)
Posted by GaviniVN at 9:34 PM 7 comments: Links to this post