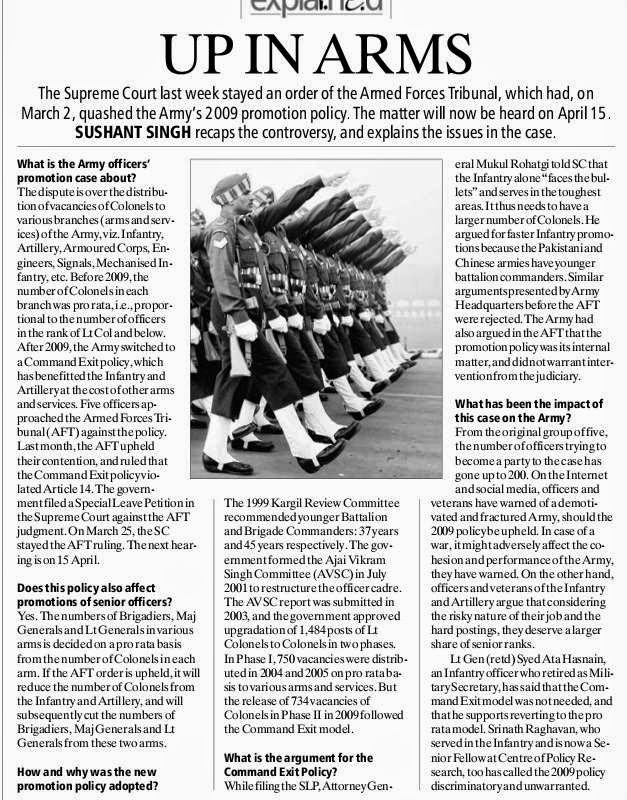 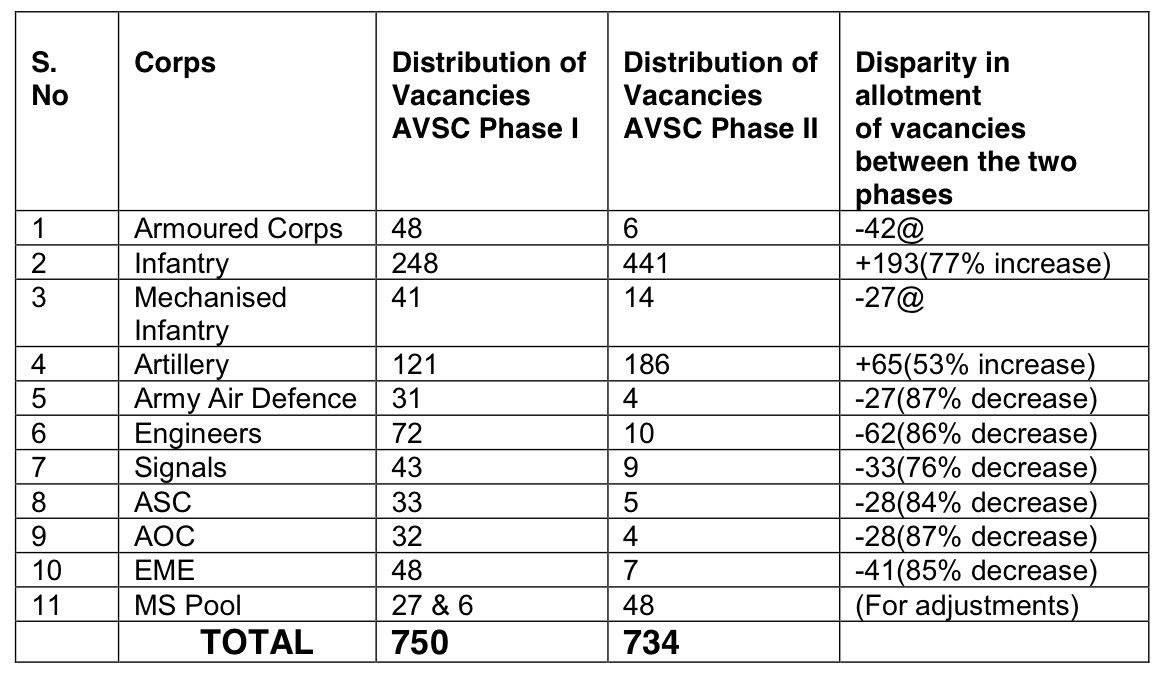 Defence Minister Manohar Parrikar has badly flubbed his first major decision relating to the morale and cohesiveness of the Indian Army. After the Armed Forces Tribunal (AFT) --- the military’s departmental tribunal --- wisely struck down a discriminatory army promotion policy, Mr Parrikar’s ministry has appealed in the Supreme Court. Instead of welcoming the AFT’s righting of a bitterly-resented wrong, Mr Parrikar has backed the divisive notion that some branches of the army are superior to others; and these should be favoured with extraordinary promotion quotas and vacancies rather than going by merit alone.

In its landmark verdict on March 2, the AFT ruled that promotions to the pivotal rank of colonel (i.e. commanding officers of units) are unfairly biased in favour of two army branches: the infantry and artillery. The tribunal held that “discriminatory” army promotion guidelines of 2009 denied “equal opportunity of promotion to all officers of all corps of Indian Army”, and ordered the reconvening of all promotion boards to the rank of colonel held since 2008. In this review, vacancies would be equitably allocated to arms and services, based on “pro rata” calculation of their actual officer strength.

Since 2009, a disproportionate share of colonel vacancies has made it possible for 60 per cent of infantry and artillery lieutenant colonels to become colonels, while officers from other arms and services have a success rate as low as 26 per cent. Worse, this injustice gets extended to the higher ranks of brigadier and general, where the vacancies for each arm or service corresponds to the number of colonels it has.

Mr Parrikar’s worrying lack of judgment lies not just in his failure to see this injustice, but also in the divisive argument that his appeal is based on. Attorney General Mukul Rohatgi told the Supreme Court that the infantry alone “faces the bullets”. Unashamedly scaremongering, he argued for faster infantry promotions because the Pakistan army has younger infantry commanders. Rohatgi forgets that India’s “older” commanders have won every war with Pakistan.

Mr Parrikar should remember his army fights as an integrated whole, not as gladiatorial infantrymen supported by lesser arms and services. Infantry units in counter-insurgency roles are officered to a major degree by young officers on deputation from other arms and services. The AFT judgment notes that their combat performance often surpasses that of infantry and artillery officers. In actual war, rapidly shifting frontlines and long-range, precision strike weaponry make the battlefield hazardous not just for infantry and artillery, but equally for engineering support, communications, repair and recovery of combat equipment and logistic support like supplying ammunition, fuel and supplies. There are few tasks more hazardous than those performed by combat engineers, which clear minefields under enemy fire. It was for this that Prem Bhagat --- an engineer, not an infantryman --- became the first Indian officer to win the legendary Victoria Cross. Every Indian soldier knows this, even if Mr Parrikar does not.

Yet how can the defence minister understand the danger of dividing officers along lines of promotion self-interest, when the army’s own generals apparently do not. The current dispute began when a dominant cabal of infantry and artillery army commanders and army chiefs from 2001 to 2009 cynically subverted the recommendations of two high-powered committees --- the Kargil Review Committee (KRC) and the Ajai Vikram Singh Committee (AVSC) --- which recommended ways of reducing the age profile of the Indian army.

In 1999, the KRC --- benefiting from the wisdom of K Subrahmanyam and George Verghese --- advocated lowering age across the army, not just for officers. Instead of recruiting soldiers for 17 years (the practice since 1976), after which they are entitled to a pension for life, the KRC recommended recruiting soldiers for just 7-10 years, after which they could be sidestepped into paramilitary forces or the police. This remains unimplemented due to Home Ministry opposition.

In 2001 the AVSC suggested ways of reducing the ages of officers at every rank and in every arm/service --- not just within the infantry and artillery. To quickly promote younger officers, the AVSC authorised additional army vacancies at senior ranks --- 1484 additional colonels; 222 more brigadiers; 75 new major generals and 20 additional lieutenant generals. This aimed at reducing the age of commanding officers (colonels) by five years to 36-37 years, of brigadiers by six years to 44-45 years, and major generals would command divisions when they were 51-52 years old, three years younger than before.

Simultaneously, the AVSC recommended a longer-term solution to the problem of a prohibitively steep promotion pyramid. This involved taking in more “short service commission” officers, who mostly retire after serving five years. For those five years, they provide the army the lieutenants and captains it needs, without staying on to compete for vacancies at senior ranks.

From 2001-2009, the AVSC’s short-term recommendations were perverted by four successive army chiefs --- two each from the infantry and artillery --- who distributed most of the newly authorised rank vacancies to their own arms through a policy called “Command Exit Model”, rammed through on January 21, 2009. This pretended that the AVSC aimed at reducing ages in the infantry and artillery, and presented a fallacious logic for allocating additional colonel vacancies to the two favoured arms. The infantry was effectively handed 110 colonel vacancies to command battalions of Rashtriya Rifles (RR) and Assam Rifles (AR), in addition to 350 infantry battalions. Although officers from every arm/service man AR and RR battalions, exclusionary conditions were framed to make it almost impossible for non-infantry officers to command these units. The infantry thus increased its colonel vacancies by 30 per cent (from 350 to 460).

To compound this advantage, it was decided that infantry colonels would command for just 2½ years. With 460 infantry colonels needed every 2½ years, that meant 184 colonel vacancies each year. In contrast, the engineers and signals were arbitrarily given command tenures of 4 years, and the logistics services of 5 years; reducing the number of colonels they needed each year.

With an artillery chief, General Deepak Kapoor, heading the army in 2009, the artillery was similarly favoured. Small “light batteries”, traditionally commanded by lieutenant colonels, were elevated to “light regiments” commanded by colonels. The artillery’s command tenure was shortened from 3½ to just 3 years.

Internal simmering within the army has boiled over after the AFT judgment. Initially just 5-6 officers went to the AFT, but now dozens are approaching the Supreme Court, adding their combined weight to the moral force of the AFT judgment. Mr Parrikar is cornered, after having briefly appeared enlightened earlier this year, when he promised the defence ministry would end its habit of fruitless appeals against adverse court verdicts. He seems likely to be rudely shocked when the Supreme Court rules on April 15.

(SOURCE- BROADSWORD)
Posted by GaviniVN at 10:59 AM