Indo-US logistic pact is not agreement to set up bases: Manohar Parrikar

The Defence Pact signed by India and the US facilitating logistical support between the two militaries is not an agreement to set up bases, Defence Minister Manohar Parrikar and his US counter- part Ashton Carter have said. Parrikar and Carter were referring to the Logistics Exchange Memorandum of Agreement (LEMOA) that was signed by the two countries on Monday after more than a decade of discussion. "There is no provision for any base or any sort of activities to set up a base in India," Parrikar told reporters at a joint news conference with Carter after the two leaders held talks at the Pentagon. 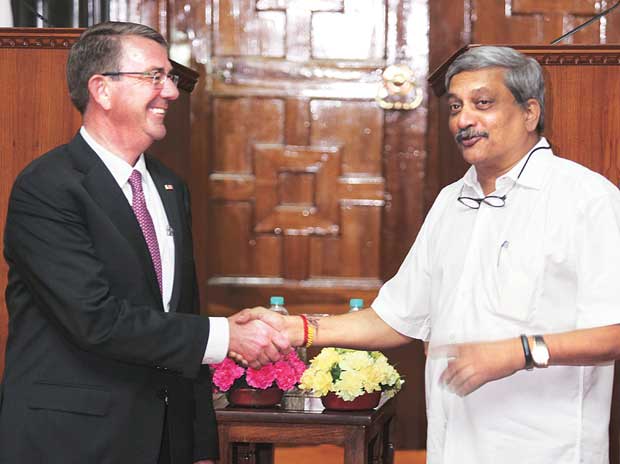 LEMOA facilitates the provision of logistical support, supplies, and services between the US and Indian militaries on a reimbursable basis, and provides a framework to govern them. This may include food, water, billeting, transportation, petroleum, oils, lubricants, clothing, medical services, spare parts and components, repair and maintenance services, training services, and other logistical items and services. "It (LEMOA) doesn't have anything to do with the setting up of base. It's basically logistics support to each other's fleet, like supply of fuel, supply of many other things which are required for joint operations, humanitarian assistance and many other relief operations. "So, it basically will ensure that both navies can be supportive of each other in the joint venture operations we do, exercises we do," Parrikar told reporters in response to a question.

LEMOA is a very substantial enabler of the two countries to work together, the US Defence Secretary said. "What it does is make possible and make easier operating together when we choose to. It doesn't by itself - those agreements - those are the things that the two governments would have to agree on a case by case basis. But when they do agree, this is an agreement that makes it all go so much more smoothly and efficiently," Carter explained. "It is fully mutual. In other words, we grant one another completely equal access and ease under this agreement. It's not a basing agreement of any kind, but it does make the logistics of joint operations so much easier and so much more efficient," he said.

This agreement only provides an additional means to fund necessary support and requires the approval of both countries on a case-by-case basis. For example, during a bilateral exercise with the US, the participant country's unit requires fuel for its equipment.

The unit cannot make the purchase unless it can pay directly and immediately.

A LEMOA agreement allows for the purchase by establishing a value for the purchase and the terms for payment, which could be replacement-in-kind or an equal-value exchange, Carter said.
(Source- Business standard)
Posted by GaviniVN at 10:47 AM