Posted by GaviniVN at 7:41 PM No comments:

LETTER TO PM ON OROP BY SHRI RAJEEV CHANDRASEKHAR MP 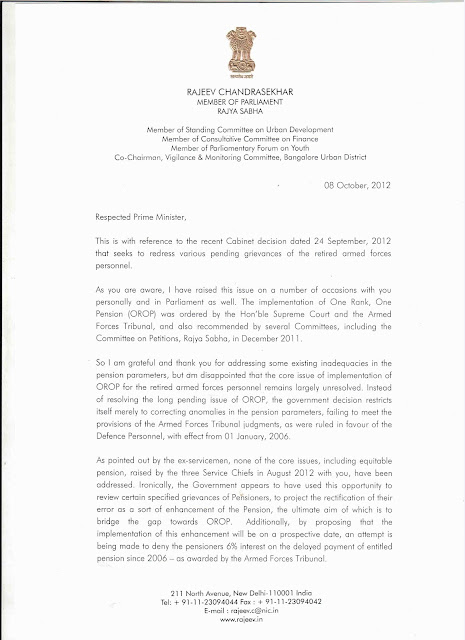 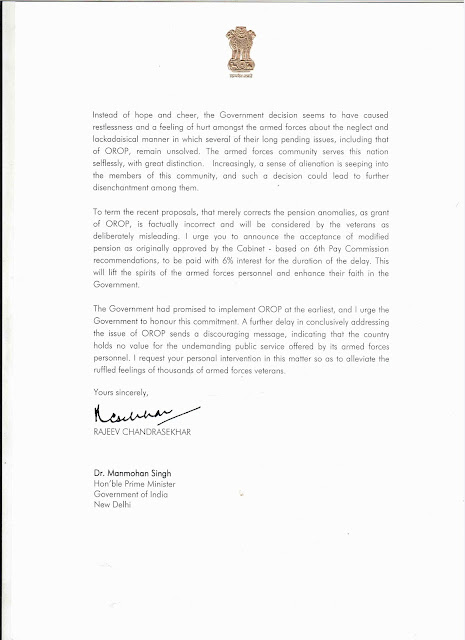 Posted by GaviniVN at 6:51 PM No comments:

DO YOU THINK YOU DIE FOR YOUR COUNTRY?”-A QUESTION TO SOLDIERS?


The conference will conclude on October 19 when Prime Minister Manmohan Singh will jointly address Commanders of all three services - the Army, Navy and Air Force.

Sources said that one of the key proposals that the Army Commanders will make to the Ministry of Defence is on re-employing ex-servicemen in the government set-up and not just the existing available openings in the paramilitary and some state police forces.

The Army wants more avenues to be made available to Junior Commissioned Officers and other ranks. Most of them retire between the age of 36 and 42 years and are skilled in specialised tasks and have the tenacity required for high-security work.

A source — giving an example — said that one clear case is of optic fibre cable (OFC) management. With so much business in India riding on telephony and internet, jawans from the ‘signals’ regiment could be used to manage the OFCs running throughout the country.

These jawans are already trained in managing the dedicated OFCs of the forces and know its secrecy protocols and the necessary precautions.

Similarly, the Army trains its jawans in the engineers regiment to repair heavy equipment, machinery and even helicopters.

The government and PSUs can utilise these instead of opting for unskilled workers outside. Also, the men are highly skilled drivers in high altitudes.

Additional natural employment for the jawans are high-risk and skill jobs like working on oil rigs, gas pipelines, oil pipelines - all these are expected to form the proposal.

Besides this issue, the Army Commanders will deliberate on having an enduring human resource promotion policy from the level of Major Generals and above.
Posted by GaviniVN at 7:24 AM No comments:

Change in Definition of Ex-serviceman and Reservation pof posts in civil services - Amendments in Ex-servicemen (Re-employment in Central Civil Services and Posts) Rules, 2012

Amendments in Ex-servicemen (Re-employment in C C S and Posts) Rules, 2012.[To be published in the Gazette of India, Extraordinary, Part II, Section 3, Sub section (i)](Govt of India, Min of PPG&P)

G.S.R. - In exercise of the powers conferred by the proviso to article 309 of the Constitution, the President hereby makes the following rules further to amend the Ex-servicemen (Re-employment in Central Civil Services and Posts) Rules, 1979, namely:-

1. (1) These rules may be called the Ex-servicemen (Re-employment in Central Civil Services and Posts) Amendment Rules, 2012.
(2) They shall come into force from the date of their publication in the Official Gazette.

2. In the Ex-servicemen (Re-employment in Central Civil Services and Posts) Rules, 1979, (I) in rule 2, for clause (c), the following clause shall be substituted, namely:-

(i) who 'has served in any rank whether as a combatant or non- combatant in the Regular Army, Navy and Air Force of the Indian Union, and
(a) who either has been retired or relieved or discharged from such service whether at his own request or being relieved by the employer after earning his or her pension; or
(b) who has been relieved from such service on medical grounds attributable to military service or circumstances beyond his control and awarded medical or other disability pension; or
(c) who has been released from such service as a result of reduction in establishment; or
(ii) who has been released from such service after completing the specific period of engagement, otherwise than at his own request, or by way of dismissal, or discharge on account of misconduct or inefficiency and has been given a gratuity; and includes personnel of the Territorial Army, namely, pension holders for continuous embodied service or broken spells of qualifying service; or
(iii) personnel of the Army Postal Service who are part of Regular Army and retired from the Army Postal Service without reversion to their parent service with pension, or are released from the Army Postal service on medical grounds attributable to or aggravated by military service or circumstance beyond their control and awarded medical or other disability pension; or
(iv) Personnel, who were on deputation in Army Postal Service for more than six months prior to the 14th April, 1987; or
(v) Gallantry award winners of the Armed forces including personnel of Territorial Army; or
(vi) Ex-recruits boarded out or relieved on medical ground and granted medical disability pension.

(2) for rule 3, the following rule shall be substituted, namely:-

"3. Application - These rules shall apply to all the Central Civil Services and Posts and the posts upto the level of Assistant Commandant in all paramilitary forces."
(3) in rule 4,- (a) for sub-rule(I), the following sub-rule shall be substituted, namely:-

(b) for sub-rule(2), the following sub-rule shall be substituted, namely:-

(c) after sub-rule (3), the following proviso shall be substituted, namely:-
"Provided that in case of recruitment to the vacancy reserved for Ex-servicemen in the Central Para Military Forces, the reserved vacancy remained unfilled due to non-availability of eligible or qualified candidates, the same shall be filled by candidates from non-ex-servicemen category".

(i )on completion of assignment (including those whose assignment is due to be completed within one year) otherwise than by way of dismissal or discharge on account of misconduct or inefficiency; or

(ii) on account of physical disability attributable to military service or on invalidment, shall be allowed maximum relaxation of five years in the upper age limit.

(Manoj Joshi)
Joint Secretary to the Government of India

(ET Bureau Oct 8, 2012, 06.42AM IST) The government has done well to accede to the longstanding demand of ex-servicemen for 'one rank, one pension (Orop)'. But the manner of putting this principle to practice has invited criticism from exservicemen. This defeats any political gain the ruling coalition expected from the decision. It is still possible to discuss this with ex-servicemen and remove the niggles that remain. This corrects a long-standing injustice to the armed forces vis-a-vis their civilian counterparts. The government had conceded the Orop demand for civilians close to a decade ago on the grounds of equity. It is iniquitous to differentiate between pension entitlement of retirees of the same rank and years of service merely on the basis of when they retire. Having accepted the merit of this in one case, there was no justification to deny it to ex-servicemen. Many would argue the nation owes more to those who guard its borders than to civilian pensioners. Governments resisted the Orop demand because of the additional stress it would impose on the exchequer. Unlike civilians who retire at 60 and, given the average life span of 70-80 years, can be expected to draw pension for an average of 10-20 years, military personnel retire earlier. As a result, they can be expected to draw pensions for much longer. The reality, moreover, is that the rules of the game are drawn up by civilians and that meant ex-servicemen had to wait for justice to be done. As a paper that has long argued for fiscal rectitude and expenditure control, it might seem at odds for us to defend a package that is expected to cost about Rs 2,300 crore annually in its present form, a little more when the package is properly fleshed out and is likely to increase in future. Except that we have never stood for a blanket clamping down on expenditure as much as for rationalisation and wise prioritisation of public expenditure. Between subsidies on diesel and cooking gas of over Rs 1.5 lakh crore and other subsidies, the Rs 2,300-crore bill on account of higher pension to ex-servicemen, there is no doubt which is more deserving. In terms of hard numbers, the amount is almost insignificant. But as a long-overdue * gesture, its significance cannot be underestimated. (Source- The Economic Times)
Posted by GaviniVN at 7:21 AM 1 comment: