File photo
Expressing displeasure over the Ministry of Defence (MoD) getting into unnecessary litigation, the Supreme Court has imposed a cost of Rs 1 lakh on the government for filing an appeal in the case of a disabled soldier when similar appeals had already been dismissed earlier.
A former soldier, Naik Balbir Singh, who hails from Hoshiarpur district, had been granted relief by the Chandigarh Bench of the Armed Forces Tribunal in 2016. The MoD, however, challenged the order.
“This is unnecessarily adding to the burden of the justice delivery systems for which the Union of India must take full responsibility,” a Division Bench comprising Justices Madan B Lokur and Deepak Gupta held recently.
It also asked the government to deposit the costs with the SC Legal Services Committee within four weeks for utilisation in juvenile justice issues.
The case is expected to come up for hearing on April 23 for the government to file its compliance report.
A committee of experts on reduction of litigation had come down heavily upon the MoD and the services headquarters for generating unnecessary “ego-fuelled litigation” by perceiving litigants as persons “acting against the state”.
The panel had noted that even SC decisions, sentiments expressed by the PM and Defence Minister and letters by A-G for reducing litigation had not had any effect.

(Source : Tribune)
Posted by GaviniVN at 6:47 PM No comments: Links to this post

APPLICABILITY OF STANDARD DEDUCTION OF Rs.40000/- FROM INCOME TAX TO PENSIONERS 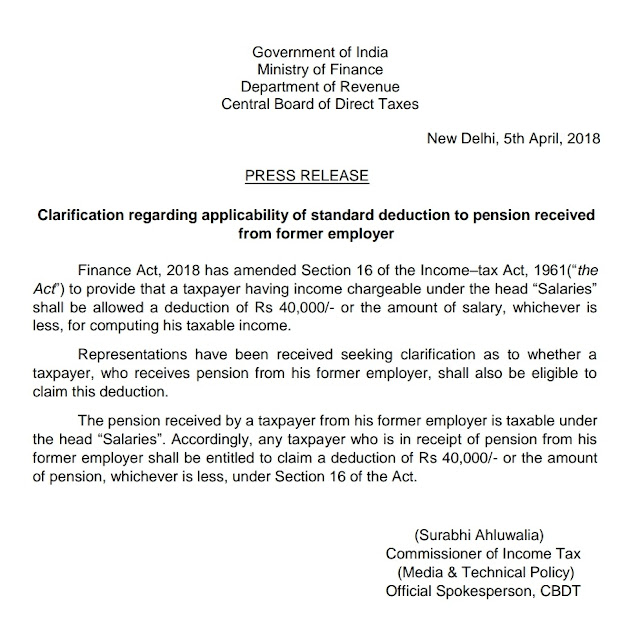 (Source : Voice of Pensioners blog)
Posted by GaviniVN at 9:52 AM No comments: Links to this post

APPEAL/REQUEST TO ONE AND ALL TO DO THIS SMALL FAVOUR

This is the season of fruits like Mango, Jamun, Jack fruit and a host of other fruits.

My request to all of u is kindly don't throw the seeds, wash them and keep it in a plastic pouch, preferably a good double wrapped paper bag or bin in your car. Whenever you go out and find barren land while  travelling, on a highway throw these seeds.

They will germinate easily the coming monsoon. If with this act we can contribute even a single tree each to our world, our mission is successful.

This is not just a random idea.

It was initiated decades ago in areas like Satara and Ratnagiri in Maharastra. Many other districts have appealed to people to spread abundance in nature this way & many citizens  have joined this wonderful mission.

It would be wonderful if all of us also join this and contribute back to our next generations world.

Will you please post this message in the known groups so that it gets circulated, thanks.

(Source : Via Gp email from B B GHAI, Veteran)

Posted by GaviniVN at 2:21 PM 3 comments: Links to this post

Soldier drowns at LAC, Def Min cites ‘missing body’ to deny pension to kin : Family Is Still Waiting After 9 Years : Sad as to how logic itself is being stretched to illogical limits due to an all-pervasive pessimistic environment just to deny benefits to our men and women in uniform

Chandigarh: The mother of a dead soldier from Himachal Pradesh has approached the Armed Forces Tribunal (AFT) after the defence ministry told her that she would not get her son’s pension. This is because Rifleman Rinku Ram of Jammu & Kashmir Rifles had in November 2009 fallen into a raging river while patrolling along the Line of Actual Control (LAC) with China and his body was never found. The defence accounts department told his mother Kamla Devi that pension would be released only after the body was found.

AFT’s Chandigarh bench, comprising Justice MS Chauhan (retd) and Lt Gen Munish Sibal (retd), has issued notice to the ministry and the accounts department on the mother’s plea. The counsel handling the case said that the demands of the accounts officers were unacceptable. “It is as if they would prefer that the family first jump into the river that flows into China and retrieve the body as proof to get the dues,” the counsel said.

The area where Ram was on patrolling duty almost a decade ago is considered one of the most treacherous terrains along the LAC. Ram’s death was declared a ‘battle casualty’ as deaths caused by drowning, avalanches and floods in operational areas are put in this category. The Army had also issued his death certificate.

Ram’s parents had been approaching authorities for ex-gratia benefits and pension since 2009. According to the plea in AFT, the office of the defence accounts (pensions) in Allahabad rejected their claim on the ground that the soldier couldn’t be treated as dead as his body hadn’t been found and was still considered “missing”. The plea adds that repeated requests from even serving Generals of the Army had no effect on the accountants who gave two reasons for not releasing the benefits. One, ordinary family pension would not be released to the mother because the father was a pensioner, and two, the liberalised family pension would not be released since the son was considered missing.

Even ex-gratia lump sum compensation given to families of all soldiers who have died in the course of performing their duty was not released. War veterans have been regularly complaining about the defence accounts department rejecting claims on “hyper-technical interpretation of rules” even after the benefits are sanctioned by executive authorities.

A committee of experts, formed by former defence minister Mahohar Parrikar had in 2015, strongly deprecated the attitude of the department and said, “We are at a loss to comprehend why negative energy and multiple reams of papers should be wasted on such issues concerning benefits of soldiers and deceased soldiers, which are anyway minor from the organizational point of view, when there are much more important financial matters worth pondering over. We find it difficult to digest as to how logic itself is being stretched to illogical limits due to an all-pervasive pessimistic environment just to deny benefits to our men and women in uniform.”