The Union Cabinet on Wednesday approved important proposals relating to modifications in the 7th CPC (Central Pay Commission) recommendations on pay and pensionary benefits in the course of their implementation.

New Delhi: The Union Cabinet on Wednesday approved important proposals relating to modifications in the 7th CPC (Central Pay Commission) recommendations on pay and pensionary benefits in the course of their implementation.
Earlier, in June, 2016, the Cabinet had approved implementation of the recommendations with an additional financial outgo of Rs 84,933 crore for 2016-17 (including arrears for 2 months of 2015-16). 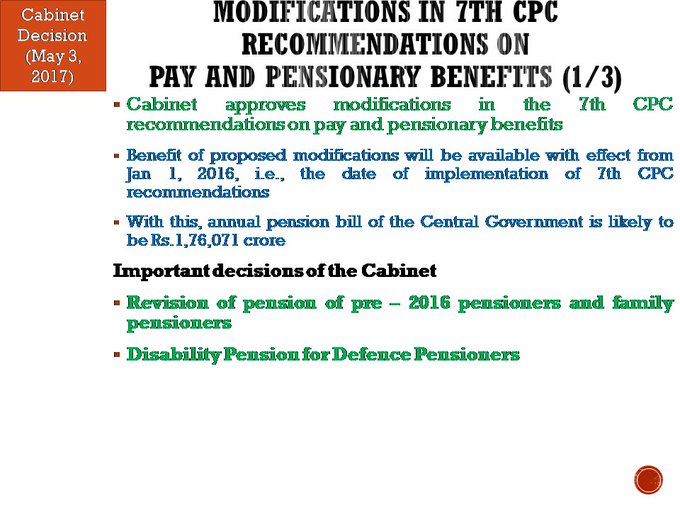 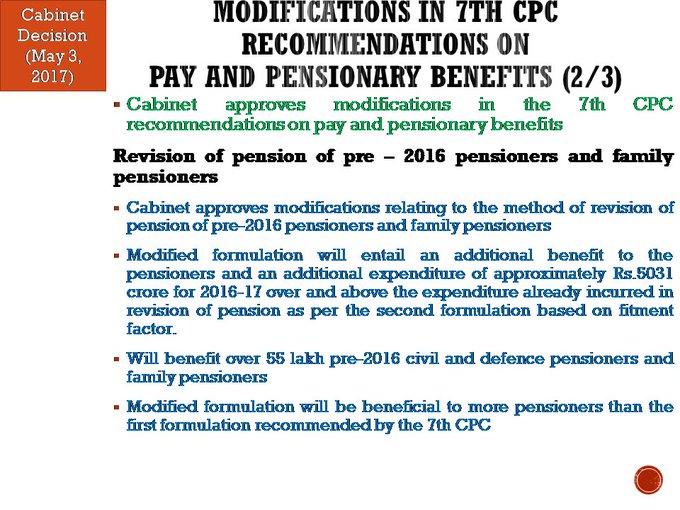 The benefit of the proposed modifications will be available with effect from 1st January, 2016, i.e., the date of implementation of 7th CPC recommendations. With the increase approved by the Cabinet, the annual pension bill alone of the Central Government is likely to be Rs 1,76,071 crore.

Some of the important decisions of the Cabinet are mentioned below:

In order to provide the more beneficial option to the pensioners, Cabinet has accepted the recommendations of the Committee, which has suggested revision of pension based on information contained in the Pension Payment Order (PPO) issued to every pensioner.  The revised procedure of fixation of notional pay is more scientific, rational and implementable in all the cases.  The Committee reached its findings based on an analysis of hundreds of live pension cases.  The modified formulation will be beneficial to more pensioners than the first formulation recommended by the 7th CPC, which was not found to be feasible to implement on account of non-availability of records in a large number of cases and was also found to be prone to several anomalies.
-Disability Pension for Defence Pensioners
The Cabinet also approved the retention of percentage-based regime of disability pension implemented post 6th CPC, which the 7th CPC had recommended to be replaced by a slab-based system.
The issue of disability pension was referred to the National Anomaly Committee by the Ministry of Defence on account of the representation received from the Defence Forces to retain the slab-based system, as it would have resulted in reduction in the amount of disability pension for existing pensioners and a reduction in the amount of disability pension for future retirees when compared to percentage-based disability pension.
The decision which will benefit existing and future Defence pensioners would entail an additional expenditure of approximately Rs 130 crore per annum.