After Government Refuses to Acquire Jumbo Majumdar's Medals, Air Force Buys Them Itself 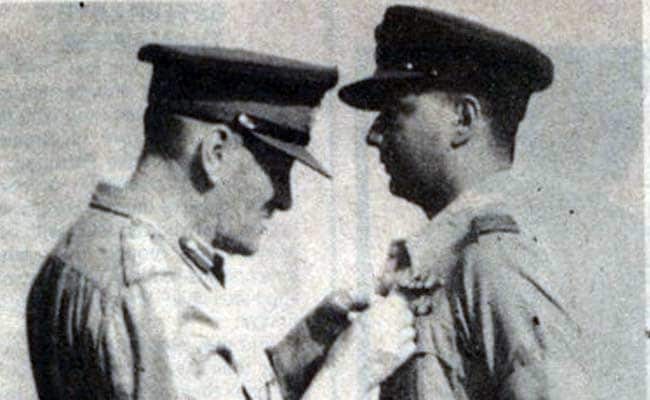 NEW DELHI:  With days left for a deadline to expire, the Indian Air Force (IAF) has used its internal funds to acquire the Distinguished Flying Cross (DFC) and the war medals of the World War II veteran Wing Commander Jumbo Majumdar from the UK-based auction house Morton and Eden.

NDTV has learnt that the top leadership of the IAF was forced to use its internal discretionary funds after the Ministry of Defence refused to sanction 30,000 pounds (approximately R
s.
28 lakh), the price fixed by Morton and Eden which had acquired the medals from Jumbo Majumdar's son Sailen Majumdar.

The IAF was forced to use its own funds after the Defence Ministry sent the file to the Culture Ministry to take a call on whether the medals should be acquired in the first place.  After waiting several months, Morton and Eden set a May 26 deadline after the IAF had entered into a binding contract with the auction house but failed to reach a settlement.  Keen to avoid defaulting on an agreement, the IAF went ahead with the purchase on its own through its Air Attache in London.


In order to avoid a controversy, the IAF has decided not to celebrate the return of the medals to India and no press release on the acquisition of the World War Two treasures has been released. It is however expected that the medals, once they return to India, will be showcased prominently at the Air Force Museum.


Despite the government's rejection, the Indian Air Force has been clear that the memory of the man they consider the father of the modern IAF must be honoured.


In a statement to NDTV, the IAF had said, "Jumbo's contribution during the Second World War both in Burma and in the Normandy Campaigns has been acknowledged in professional circles.  He was the first and the only IAF pilot to be awarded DFC and Bar.  Having understood the importance of Air Power at a very early age, he worked relentlessly to build a strong Air Force for India.  Jumbo led from the front by personal example and worked relentlessly to lay the foundation of the IAF.  His spirit shall live as long as there are young men to take up the challenge of his legacy, and the trail of glory shall be remembered and cherished by the IAF forever."


In a letter marked to NDTV, Sailen Majumdar has said, "I also have somewhere the crucifix that my paternal grandmother Jonaki Agnes Penelope Majumdar (nee Bonnerjee) had made from the metal of the ill-fated Hurricane that my father crashed in. In addition, a note book where he made very personal and philosophical comments about his role in World War 2. I have to decide what to do with numerous letters between my parents during World War 2. Personal but such a long time ago that perhaps they should now be in the public domain for anyone who is interested rather than them being binned or left in a drawer forever!"


Mr Majumdar has also offered to hand over a 1940s copy of a yearbook of St. Paul's School Darjeeling, his alma mater, to this correspondent. The Rector of St. Paul's, who the correspondent has contacted, has said that he would be glad to receive it later this year.


In November last year, the Indian Air Force belatedly entered an agreement with Morton and Eden after an auction for the medals fell below the reserve price and they couldn't be sold.  Air Marshal (retired) Anil Chopra who once commanded 1 Squadron - Jumbo's old squadron - had also gone on record on NDTV offering to buy the medals from his pension fund but was told by the IAF to stand down since they intended to raise the funds themselves.


The sad story of the medals first came to light when Sailen Majumdar, Jumbo's UK-based son, decided to auction them in a move strongly criticised by his sister Anjali Lobo who says she never consented to the medals being auctioned.


Anjali Lobo has told NDTV, "I feel really sad about it. What else can I say? My father died for the IAF. He would be very sad at this impasse. These are my father's medals and they have become an object of commerce and it is shocking."


Karun Krishna 'Jumbo' Majumdar was the ultimate flier, a hero in the truest sense of the word. He was awarded the Distinguished Flying Cross by the Royal Air Force not once, but twice, for bravery during the Second World War where he flew over both the Burma front and in Europe.


The auction documents states, "Jumbo Majumdar's seeming disregard for his own safety on solo bombing raids and leading others against what appeared to be insurmountable odds made him a legendary figure both in the Royal Air Force and among his own countrymen. It is generally agreed that had he lived, his example and vision for Indian air power would have seen him rise to the highest level in the post-Independence Indian Air Force."