The armed forces, in their demand to the 7th Central Pay Commission, have asked for parity and restoration of status which was downgraded in the last pay commission. A joint services memo-randum addresses issues of serving and retired personnel – officers and men.


The key demand is fixation of grade pay, which defines status in the Government of India. The forces have pointed out that a Joint Secretary gets Rs 10,000 grade pay after 18 yrs of service, a Brigadier or his equal rank in other forces get Rs 8,900 while a Major General and equal ranks with almost 30-31 years service get grade pay of Rs 10,000.
The grade pay needs to be rationalised and some parity be made to ensure status for officers. The grade pay of Rs 10,000 is under the ‘senior administrative grade’ (SAG) and only 0.82 officers in forces are in the SAG whereas in the civilian side, 47 per cent of all officers are in the same SAG.
The forces have pointed out that running pay-bands, rather being of help, have caused loss of financial benefits, sources said. Citing the example of pay-band IV (basic pay between Rs 37,400 to Rs 67,000), the forces say it is applicable for four ranks that is Lieutenant Colonel, Colonel, Brigadier and Major General, whereas in the civilian sector, its is applicable to only two ranks – Director and Joint Secretary - hence it makes sense there as annual increments are given.
Promotions in the forces are late. By the time, an officer gets to the rank of Major General or equal in other forces, he has already hit the top basic pay limit of Rs 67,000, his annual increments stop till he gets promoted as Lieutenant General.
At least in the Army, there are dozens of such cases. To overcome this anomaly, a suggestion is to put Major General-rank officers in the higher administrative grade, presently paid to Lieutenant-Generals and equal ranks of other forces. This, according to the last pay commission, has a basic pay between Rs 67,000 and Rs 79,000. Also, any person stagnating in his pay-band should be allowed to get next pay-band salary, say the forces.
The forces want that the last year of the training period at the Indian Military Academy be counted as part of service as was the case with the IAS and IPS cadre.
The memorandum says the Military Service Pay (MSP) amount is very small and it does not count towards status. It has become a hindrance and its is cited each time a financial demand is made. 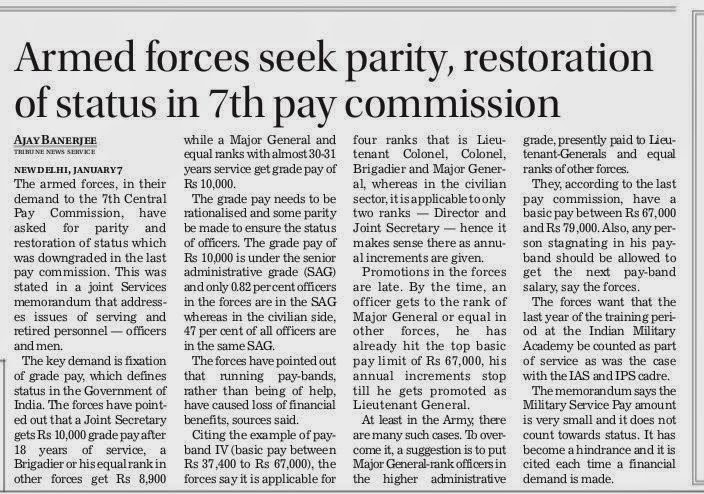