Government will keep its promise of one rank, one pension: Union minister Rajyavardhan Singh Rathore 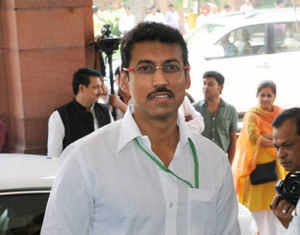 BJP has a common thread with the armed forces — that of the ideology of nation first, says Union minister Rajyavardhan Singh Rathore.
If social media enhances and expedites reach, it also exposes people twice as fast. I recently came across an online article on 'One Rank, One Pension' (OROP) written by a suave former diplomat-turned-politician, which had little thought and no action behind it. To counter the breakout of Modi sarkar (military lingo for rapid expansion), the self-styled generals of Congress have been scoring countless self goals. As I write, I look up intermittently to skim through the TV news channels, and see the Congress taking the contrarian view on the 'Pakistan boat issue' demonstrating a decade-old mentality -- wait for Delhi to sanction action. Old habits die hard.

That is not how the Indian military and paramilitary have been trained. Being one of the best and most selfless in the world, a warrior's code of conduct is driven by his 'farz' or duty, honour of his 'Paltan', and his nation's 'izzat'. The monthly remuneration can in no way compensate these sacrifices, as a soldier routinely and regularly goes beyond the call of duty for the 'izzat' he holds so dear. And this fact is closest to the heart of the BJP.

BJP has a common thread with the armed forces -- that of the ideology of nation first. Narendra Modi declared his commitment to stand by servicemen, veterans and OROP at a rally in Rewari in 2013. Congress, sensing a potential vote bank did not want to miss the bus so they hurriedly announced OROP and dished out a meagre sum towards it. Therein lies the difference, the uniformed forces are not a vote bank but a value bank for us. Our defence minister went on record, committing to deliver OROP and the finance minister did so in his budget speech. Assurances on the floor of the House are sacrosanct and only in rare circumstances does their completion go a little beyond the financial year. The departments involved in OROP are defence, defence finance, finance and personnel. To get them to speak in one voice and have one view may take time but it will be done. This in itself may lower the satisfaction levels of a few impatient ones and that's when the defence minister spoke of delivering 80% satisfaction he did not say 80% pension. When we have waited for decades, what's a few months more? The armed forces can rest assured that the OROP is perfectly within the credible sights of the PM, FM and 'RM' of this government.

So what's taking time? OROP implies an officer of the same number of years of service and same rank gets the same pension irrespective of the year of retirement. But officers with the same years of service and same rank do not usually get the same salary. This is due to the number of years spent in each rank, or in other words, because of staggered promotion. For example, one colonel could spend more time in the rank of 'colonel' while another colonel may take longer to reach the rank, thus getting less time in the rank of colonel itself. Both may have the same number of total years of military service, but their salary itself will be different.

The one reaching colonel first gets a higher salary. Since pension itself is a derivative of salary, pensions will be different too. There will be thousands of variations in each rank, and we have not even begun counting. This is just one of the many challenges but the government is committed to finding a solution and, without penalising anyone, bringing in a harmonious and simple methodology for calculation of pensions as prescribed in the spirit of OROP. Will my honourable colleagues from the Opposition show some patience and wait for the end of the financial year or will they play spoilsport?

It is in this government that the service chiefs have direct access to the political leadership. In the first 200 days itself, meetings between civil and military leadership far outnumber the total number of meetings held in the last decade of UPA. Protocols are for formal occasions; when the tigers meet, the lambs have no place. Supremacy is of leadership; military and then political, period.

This government has faith in every field commander and soldier to do what's right for the country. Congress weakened the armed forces, reduced fighting capability. Its political indecisiveness and hesitation dulled the sharpness and led to beheadings, embarrassment and lowered morale. In 200 days, critical procurements stuck for the last several years have been cleared. Our responses on the border are with befitting ferocity. War memorial ordered. OROP will be delivered. Modi was also the first PM to celebrate Diwali with soldiers in field.

Congress needs to stop doubting the veracity of the very forces that protect us. They are indeed the wall between heaven and hell. It's thanks to social media that citizens pay rich tributes to our warriors in uniform. And it's from the social media I quote for the benefit of my Congress colleagues: "If you cannot stand behind our troops, feel free to stand in front of them".