A letter to the PM -One Rank One Pension - By Shalini.

For Your Information Sir.

A war widow at the age of 78 has to walk 18 km every month to collect her martyr husband’s pension of Rs .13/- (Rupees Thirteen only). The Freedom Fighters of Colonial India and their widows get a better pension than what is given to the Retired Military population. Even the laborers could get their daily wages hiked with time but the war widow stands where her husband left her. Have we lost all dignity, sense of respect and basic common sense for humanity? Where are we? Rs 13/- as monthly pension and a Kg of onion, Rs 50/-. For God’s sake……. Do we still need to talk ?

Our Flag does not hover because the wind moves it, it flutters with the last breath of each soldier who died and with each breath of the soldier who lives protecting it. You don’t get to deliver a speech on the Independence Day just because you are the PM, it is because of the human shield that sweats and freezes throughout the prime of their lives.

One speech you made to the tens of thousands Ex-Servicemen at Hissar, where you committed to implement One Rank One Pension (OROP), if elected, allowing you to tap into the vote bank of the services - retired, in-service, war widows and of course their families. You should dedicate your present electoral victory to the Services. Was it just voting bank politics, Sir? Gen VK Singh (Retd) stood testimony to your promise and more than you the personnel’s believed their Gen who is now a part of your Govt. Let the men not lose faith on their roaring Gen and let your politics not make him a scapegoat please.

Mr. Pradhan Sevak of the country. as you proclaim yourself to be, kindly refrain from politicizing the Services, the only Deptt committed to the country and its people. High time you and your team including your squad of so called highly efficient bureaucrats save yourself from the mockery you have brought on your kindselves.

Let there be some humility and respect by the Govt and the Police force while managing our Military veterans at peaceful protest with utmost dignity. When you fail to discharge your duties efficiently, that has often happened, be it a natural disaster or an internal security issue; the only alternate available is the forces for help. They did and have come to your rescue without fail. Our neighbours have a very drastic history of Military Coups since 1958 & have been successful thrice in doing so. Let’s not forget we have an active force of 1325000 personnel, with approximately 60K retiring each year. Let’s us not create conducive environment for more trouble within the country.

The Military of the country cannot be taken on a ride for votes and then just left. High time seriousness be taken on the mature and highly sensitive  protest that is going on at the Jantar Mantar and India Gate for two months now. The men there have served selflessly be it insurgency, internal security issues, disaster mitigation without any reservations. They have been decorated for their gallant and then just forgotten …not acceptable.

Mr. PM, please shun talks - time to act and show and prove that what the Congress failed and kept washing their hands off has finally been given life by you.

Let the slogan ‘Jai Jawan Jai Kisan’ echo till eternity and your name be added to it. Let the soldiers remain to be our pride.

Shalini. A citizen of the country.

A proud daughter of a proud Artillery Veteran

The concept – One Rank One Pension (OROP)

"bridging the gap between the rate of pension of the current pensioners and the past pensioners, and also future enhancements in the rate of pension to be automatically passed on to the past pensioners. In armed forces, equality in service has two components, namely, rank and length of service. The importance of rank is inherent in armed forces as it has been granted by the President of India and signifies command, control and responsibility in consonance with ethos of service. These ranks are even allowed to be retained by the individual concerned after his/her retirement. Hence, two armed personnel in the same rank and equal length of service should get same pension irrespective of date of retirement and any future enhancement in rates of pension be automatically passed on to the past pensioners." 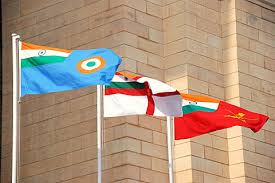 COMMENTS
Posted by GaviniVN at 7:12 PM