No Faith in Parrikar's Statement on One Rank One Pension: Ex-Servicemen 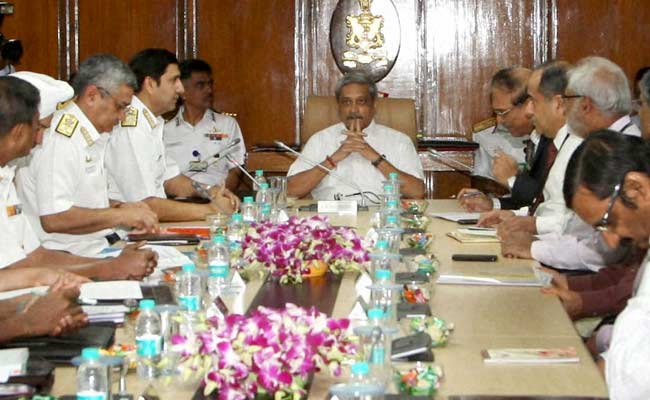 Defence Minister Manohar Parrikar addressing the Naval Commanders, at the biannual Naval Commanders' Conference, in New Delhi on Monday, October 26, 2015. (Press Trust of India photo)
NEW DELHI:  Armed forces veterans staging a protest in New Delhi to press their demand for 'One Rank One Pension' (OROP) said today that they have no faith in Defence Minister Manohar Parrikar's statement that the OROP notification would be issued after the Bihar polls.

"The minister has changed the goalposts and hence the veterans have no faith in this statement," Maj Gen Satbir Singh (retd), who has been spearheading the Indian ex-servicemen's movement on the issue, told IANS. "Keeping in view the track record of the government and the minister on OROP implementation, we have no faith in this statement. This is just another statement. He has been changing the goalposts," Mr Satbir Singh said.

"He said it is a gift. What gift? It is our right... not a gift. We are very angry and aghast at the delay in (implementation of) an already sanctioned scheme," said the veteran soldier.

On Sunday, the veterans wrote a letter signed in blood to Prime Minister Narendra Modi. "The government announcement on September 5 regarding OROP has seven serious shortcomings. If implemented without the removal of these shortcomings, it will kill the very definition of OROP which has been approved by two parliaments, strongly recommended by the Koshyari Committee and promised by you to ex-servicemen and armed forces personnel," the letter said.

Mr Parrikar toady said the OROP notification would come after the Bihar polls, and the government was trying to issue it before Diwali, which falls on November 11.

The fifth and last phase of Bihar polls would take place on November 5, with counting of votes on November 8. The model code of conduct will remain in force till November 12.
Story First Published: October 26, 2015 19:13 IST
(Source NDTV)
Posted by GaviniVN at 10:12 PM