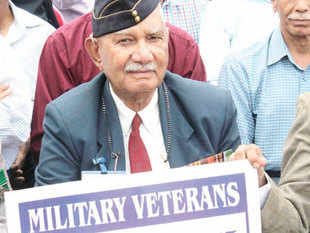 The government's refusal to commit to a time frame for implementing 1 Rank 1 Pension policy in the armed forces has prompted organisations representing ex-servicemen to resort to new tactics to press for their demand even as their members continue the relay hunger strike that they began in Delhi on June 15.

The United Front of Exservicemen, a conglomerate of all veterans' organisations, has decided to hold protests outside homes of parliamentarians, send teams to election-bound states to discourage people from voting for the ruling National Democratic Alliance and hold flash mobs across Delhi to generate awareness about the issue. In addition to this, war widows will express their frustration by sending the President letters signed with blood along with a bangle.

"The government is not realising the demoralising effect that its ignorance is causing on servicemen across the country," said Colonel (retd) Devinder Bahl, spokesperson of the Indian Exservicemen Movement, the organisation spearheading the protests around the country.

Stressing on the raising anger among other ranks, Bahl said that the protesters are considering both direct action and indirect action to make the government sit up and take notice. Direct action will involve blockade of roads across cities and public transport or fasting unto death, whereas indirect action will take a more calculated approach, with spot mobs across the country, protest letters and large demonstrations.

According to the members of the group, the majority is leaning towards the indirect approach though Bahl said that the floodgates cannot be held back for a long time, implying that the growing resentment may prompt widows of decorated servicemen, for instance, to begin a fast unto death.

(Source- Economic Times)
Posted by GaviniVN at 9:30 AM