ABSOLUTELY AMAZING : A WINDOW INTO INDIA'S PAST- THE FORGOTTON STEPWELLS

They must have also been used for religious rituals to justify the enormous capital cost (and labor) of the elaborate carvings, not to mention superior engineering skills that surpass even our modern-day technology.
The Forgotten Stepwells:
Thousands of Masterpieces in Engineering, Architecture and Craftsmanship Provide a Window into India’s Past 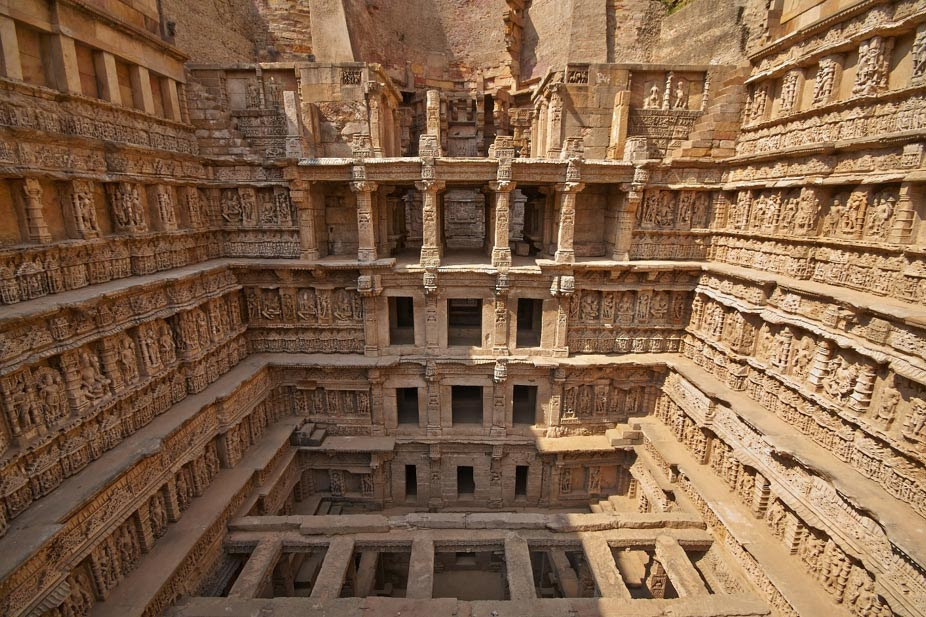 Stepwells are magnificent architectural structures found in India that tapped into underground water tables, providing a year-round water supply. Thousands of the engineering masterpieces are dotted around the country, many containing ornate and intricate carvings depicting Hindu scenes. While many are now dilapidated and in a state of disrepair, others remain as visually stunning windows into India’s glorious past.
As its name suggests, a stepwell consists of a well/pool of water which may be accessed via a flight of stairs. Whilst it is not entirely clear as to when stepwells began to be constructed, the archaeological excavation of Mohenjo-daro, one of the largest settlements of the Indus Valley Civilisation, has uncovered a large structure resembling a water tank. This has been dubbed as the ‘Great Bath’, and may be a precursor to the decorative stepwells of India. 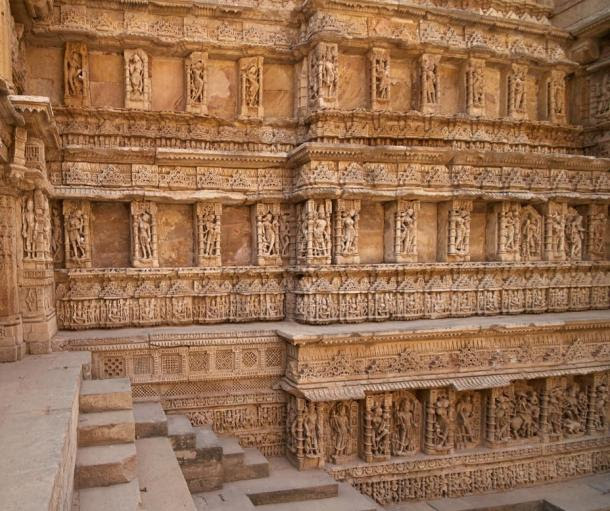 Early Stepwells and Their Purpose

The earliest stepwells (known also as baori) are speculated to have been built during the 1st millennium AD (some sources placing them in the 6th century AD, whilst others say they were first built between the 2nd and 4th centuries AD). The construction of stepwells developed over time and by the medieval period they became complex structures that showcased a mastery of engineering, architecture, and art. Hence, the best-known stepwells today date to this period of Indian history. Stepwells continued to be built in India, and it has been estimated that by 19th century there were several thousand stepwells in existence.

Stepwells were initially built for the utilitarian purpose of storing water, especially in areas where it is dry for the greater part of the year, but have several weeks of torrential monsoon rains. In such areas, stepwells collect water during the rainy seasons (and perhaps reduced the risk of flooding) which could then be used throughout the rest of the year. For these stepwells to function efficiently, they had to be large and deep enough. Rani Ki Ji Baori (also known as ‘Queen’s Stepwell’) in Rajasthan, for example, has a length of 64 meters (209.97 ft.), a width of 20 meters (65.62 ft.), and a depth of 46 meters (150.92 ft.) 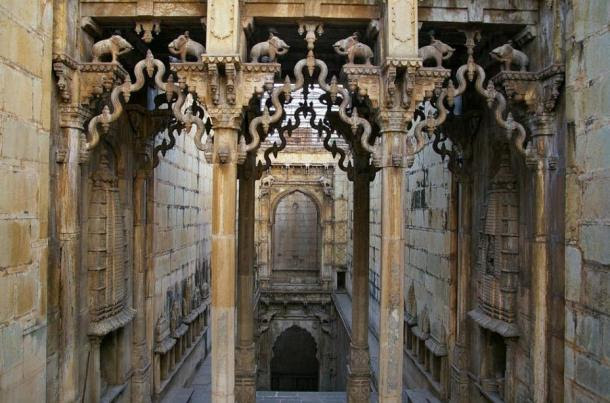 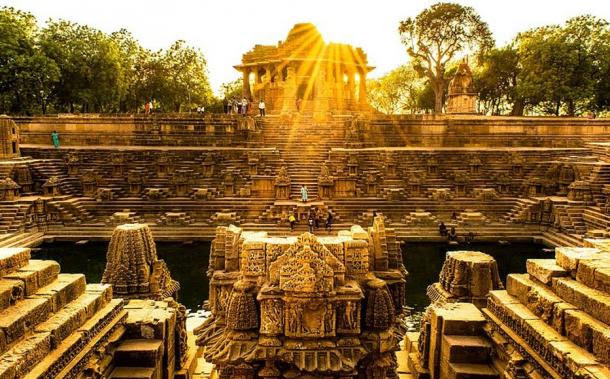 Stepwells during the medieval period were not merely utilitarian structures, but also artistic masterpieces. For example, the Adalaj Vav in Gujarat is a five-storey stepwell with octagonal landings. Towards the end of the 15th century, the area where the well is located was known as Dandai Desh, and was ruled by a Hindu monarch. Whilst the Adalaj Vav was being built, a neighbouring Muslim ruler invaded the area, sacked it, and disposed of the king. The conqueror fell in love with the widowed queen, and wanted to marry her. The queen demanded that her late husband’s stepwell be completed in return for her hand in marriage. The ruler agreed, and continued the construction of the Adalaj Vav. The result was a stepwell that blended Islamic architecture with Hindu symbolism, and contained intricate carvings of flora and fauna. The story has a tragic ending, though, as the queen, after inspecting the stepwell when it was almost completed, committed suicide by throwing herself down into the structure. 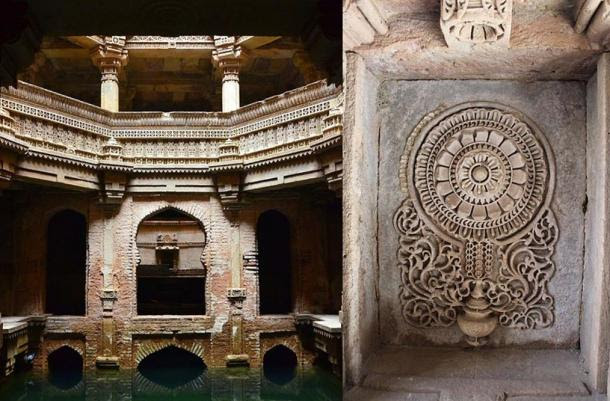 Whilst there are many stepwells in India today, a number of them have been forgotten and left to decay. This abandonment is not an entirely new phenomenon. During the British Raj, for example, stepwells were viewed as unhygienic, as they were thought to be breeding grounds for diseases and parasites. As a result, the authorities had many stepwells barricaded, filled in, or simply destroyed. Today, modern water supply systems, such as taps and water tanks, have also reduced dependency on stepwells. Consequently, some stepwells have become rubbish dumps and latrines, whilst others have been turned into storage areas, quarried for their stone, or just left to deteriorate. 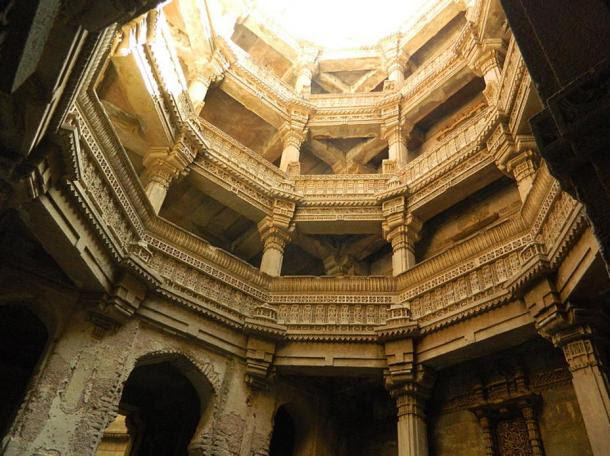 View from the bottom of Rudabai stepwell. (CC BY SA 3.0)

In late 2014, it was reported that officials in Delhi authorized the de-silting and restoration of five medieval stepwells, following the successful work that was carried out on two others. Thus, there is hope that these historical monuments will receive the care and attention they deserve. Moreover, some Indian engineers are also reported to have drawn inspiration from these ancient structures to design new tanks for water collection. 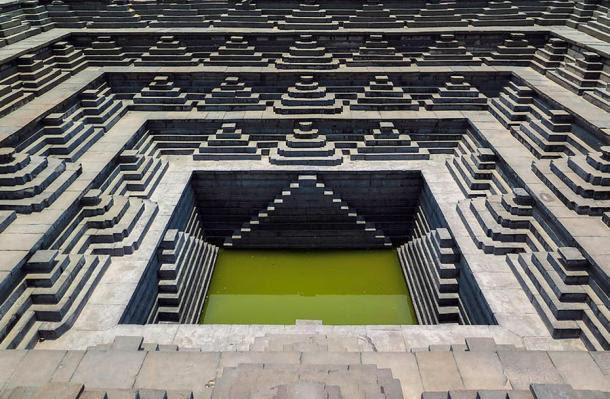