Why OROP is imminently affordable

As veterans take turns to go on a relay hunger strike across India and mainly at Delhi’s Jantar Mantar over the non-implementation of the ‘One Rank One Pension’ demand, I went looking for the so-called complicated and tedious formula that has apparently kept the government tied up in knots.

After talking to experts and pouring over many documents—not my cup of tea really, but I thought I owed it to my father who retired in May 1982 as a Subedar Major and who checks with me every week whether OROP will ever be implemented—I have managed to conclude that all arguments about burgeoning defence pension bill being un-affordable to the government is nothing but a myth.

Before proceeding further however, it must be clarified that the current defence pension expenditure of Rs 54,500 crores (2015-16) also includes defence civilians who approximately number 400,000.

Now, the perceived exponential rise in pension bill needs to be put in the correct perspective. The figure would rise in absolute numbers of course but when viewed as a percentage of the nation’s GDP, the expenditure on defence pension shows an overall declining trend as the table below will illustrate: 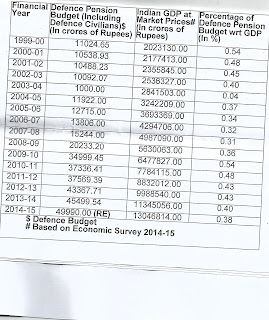 The defence pensions as a percentage of GDP thus shows a clear long term declining trend despite an absolute rise in numbers (the spike in 2009-10 was due to payment of arrears for years 2006, 2007 and 2008 after the award of the 6th pay commission).

Now why does the military have higher number of pensioners as compared to their civilian counterparts? Simple. The nation needs a young army and therefore soldiers are recruited young and retired early (most of them between 34-37 years). On the contrary, all non-military government employees (including jawans of the Central Armed Police Forces—CAPFs) have the luxury of serving till the age of 60. The ratio of pensioners to serving personnel in the military is thus 1.7:1 as against 0.56:1 among the civilians. But that’s the price the nation needs to pay for maintaining a standing army.

Had the long-standing recommendations for lateral absorption of this vast, disciplined and ready made pool of manpower in various non-military organisations been implemented, perhaps the pension bill could have been reduced but that has not happened because of lack of political will and bureaucratic resistance.

There is one more reason why the military pension bill will further reduce in terms of percentage of the GDP: All civilians in defence ministry who joined service on or after 1 January 2004, have now come under the ambit of the contributory National Pension Scheme (NPS). Soldiers unfortunately cannot be brought under the ambit of the NPS because of their short service span. The benefit of NPS, it should be noted, accrues over a long span of time (30 years or more) deriving the benefit from the power of compounding the accrued amount!

Now to the second part of the entire issue: the complexity of calculations.

The format of the existing pension tables issued by the government gives pension of a soldier based on two variables – his rank and length of service. The pension for a given rank for higher length of service will be higher.  Hence, if a Sepoy gets Rs 5,480 as pension on retiring at 17 years of service, a Sepoy retiring at 18 years of service would be getting pension higher than Rs 5,480.  Ideally, the pension of a Sepoy retiring at 18 years of service should be 3 per cent higher, i.e Rs 5,614.  But due to various reasons the difference is invariably not three per cent.  It is due to this anomalous situation that annual reviews are required for OROP which will have additional financial implication. However, the outgo for government will decline with each subsequent annual review and in steady state will be almost zero, when for a particular rank, pensions for each year of service will be approx three per cent higher than preceding year of service.

How pension Bill will actually decline

Bunching Effect Will Peter Out.    Bunching of salaries, and hence pensions, for a particular rank happens for a number of reasons.  Bunching implies same salary, and hence pension, for a particular rank even with different years of service, despite the Running Pay Band System introduced by 6th Central Pay Commission—CPC--(salary increases automatically with three per cent annual increment in Running Pay Band System; hence higher salary for higher number of years of service).

For example, take the case of Majors, with 13, 14, 15, 16 years of service in December 2004.  When Lt Col was made a non-selection grade rank (earlier selection grade rank around 16-18 years of service) in 13 years of service, all Majors with service higher than 13 years were made Lt Cols together on the same date and fixed into the same 5th CPC pay scale of Lt Col.  Their replacement scales in 6th CPC, hence, were also same.  Now these Lt Cols (if not promoted to Col subsequently) of different years of service will keep getting same pay of Lt Col/ Col (Timescale--TS) till they retire; they will get same pension on retirement also.  Once OROP is implemented, pension figures of the rank of Col (TS) for years 30, 31, 32, 33 years (they may reach retirement age of 54 in different years) may be same instead of being separated by approx three per cent annual difference.  Now if, annual review of OROP tables is carried out, using these ‘Bunched Up’ pension figures, the pension for Col (TS) of 33 years will be higher than Col (TS) of 33 years of previous year’s OROP table by approximately three per cent since the erstwhile year’s serving Col of 32 years will get three per cent increment and may retire with three per cent higher pension in 33 years.

Experts say another way to comprehend the declining financial implication of annual review is to draw an analogy from the ‘Damping Out’ of a Sinusoidal Wave.  Unless there is an external impulse, the sinusoidal wave gets damped out.  Similarly, as Bunching Effect and other anomalies exit the system of pay and pensions, with no external impulse (i.e, change in terms and conditions of service), the additional financial implications of annual review of OROP will continuously reduce and in steady state will be almost zero.

So, all the arguments that the nation cannot afford the steadily increasing defence pension bill in the long run, is specious to say the least. If India wants to be strong, it needs a powerful military which acts as a deterrent against all adversaries. And if the nation needs a strong military, it is the obligation of the state to look after its soldiers—both serving and retired-- reasonably well.

The Narendra Modi government will do well to remember that if it wants to be seen to be a friend of the soldier, there is no alternative but take a quick decision on OROP implementation. In a lighter vein, if that does not happen, my weekly call to my parents will invariably continue to begin with a question: What's happening to OROP?