NEW DELHI: Voicing "dismay" over inability of political leadership to implement 'One Rank One Pension' scheme, ten former service chiefs have written an open letter to Prime Minister Narendra Modi saying the issue should be resolved expeditiously within a time frame as any further delay will lower the morale of the armed forces.

They also sought immediate action against Delhi Police for its high handedness on August 14 against the veterans who were staging protest at Jantar Mantar to demand OROP implementation. The development came on a day when two of the agitating ex-servicemen launched fast-unto-death, stepping up the stir on the issue.

"We had earlier not approached the Honourable Prime Minister as we had full faith in the announcements made by our senior political leadership from time to time. We were also hopeful that the announcement of the implementation of the OROP would be made to the Nation on Independence Day. Regrettably this has not happened," said the letter.

"We have full faith in our political leadership but their inability to clinch the issue leaves us dismayed. We stand steadfastly by the side of our colleagues and fully support their just cause," the letter said talking about the ongoing protest at Jantar Mantar by the ex-servicemen community.

The letter said that their silence so far was to observe propriety.

"As much as the ORP, the respect and dignity of the soldier is at stake here and let it be known that we have extreme concern for the veterans' long pending demands.

"We would strongly urge the Government to settle this issue expeditiously and in an urgent time frame. Any further delays in our considered view will be at the cost of damaging the pride of veterans and lowering the morale of armed forces. The nation can ill afford such an imbroglio," the letter said.

The former service chiefs said there is only one definition of OROP accepted by Parliament and also by the Defence Minister in the presence of the veterans.

"This is 'uniform pension to be paid to the Armed Forces retiring in the same rank with same length of service irrespective of their date of retirement'. Simultaneously, 'Annual Review System' would be required to be put in place for equalization of pension of the past and current retirees," it said. 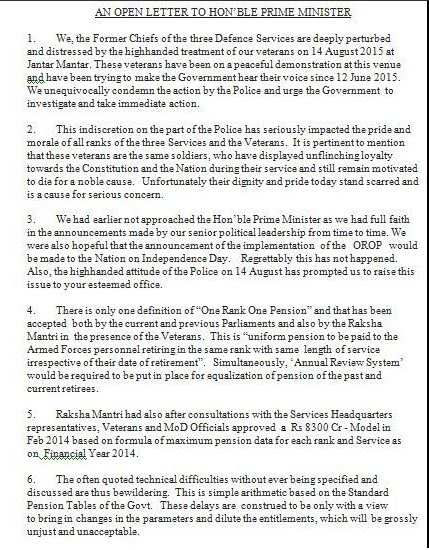 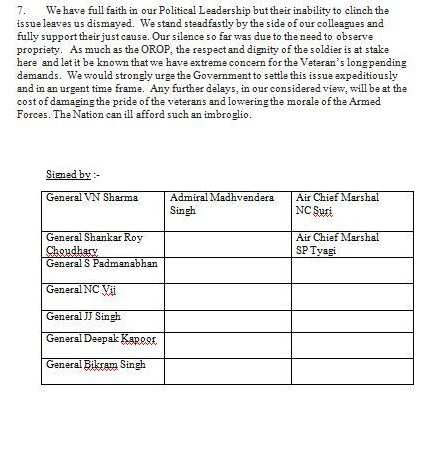