Two good news articles in the aftermath of Uri Attack, that I found worthwhile reading.

Charu Sharma (A fauji kid)
=============================================================
Uri terror attack: Dear govt, if you choose to strike, keep media jingoists out - By Akshaya  Mishra
As provocations go, this is as big as it can get. The attack on the infantry battalion at Uri in Baramulla district, which claimed lives of 17 soldiers, stands out for its brazenness and in-your-face quality. “Yes, we have done it. We will do it again, and again. What can you do?” This, clearly, is the question and statement as well, from the perpetrators to the Indian authorities. Now, it’s for the government to respond. If the response is not adequate and proportionate to the damage caused, then it could end up with egg on its face. 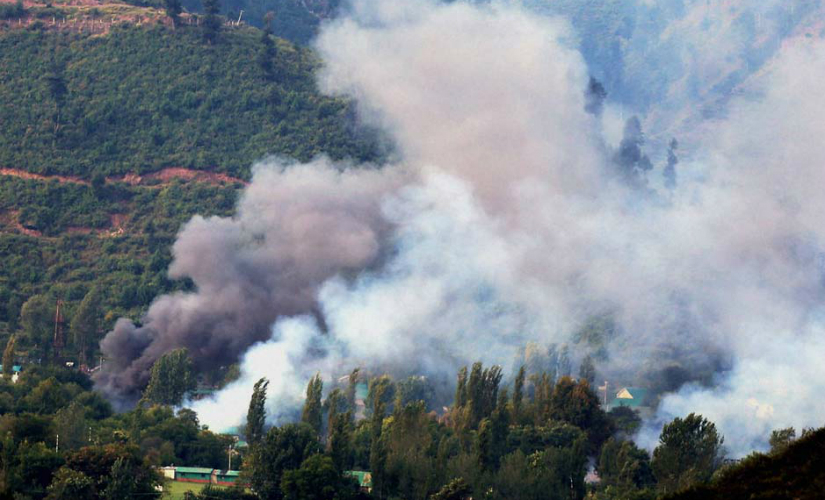 Smoke rises from the Army Brigade camp in Uri on Sunday. PTI
While it is being called a terror attack, it almost looks like an act of war. Blaming non-state actors backed by the Pakistani establishment won’t suffice anymore. Producing a bulk of literature to indicate Pakistan’s direct or indirect involvement in the attack won’t help either. We have been through this drill before. It has taken us nowhere. It is also obvious that the aggressive posturing of the government towards the country, at least in words, has not changed the ground realities a bit. According to media reports, infiltrations bids have increased – 90 till June end this year compared to 29 the corresponding period last year and attacks on security personnel have been more audacious.
The strategy to shame Pakistan before the global community for its support to terrorist groups has its limitations. This is for the simple reason that the global community may not have the same eagerness as earlier in intervening in conflicts in this region. Most countries are caught in their own domestic problems, particularly on the economy front, and are not likely to go beyond lip service. The countries that actually matter – China and the US – have vested interests, geopolitical and economic, in Pakistan and are fully aware of its character. So, by raising Balochistan orhuman rights violations in PoK repeatedly in international fora, India would not be winning too many tactical points.
After the Uri provocation, the government needs to go beyond the routine response. If it does not, it would end up looking miserable – the mismatch between its rhetoric and reality would come across stark. So what’s the response going to be? The war option may look impressive to the government’s captive, hungry-for-macho-action audience but it’s never an easy one. Hot-pursuit could be a consideration. Whatever it is, the response has to be tough, tactically sound and finally, effective. Before the government and security think tanks confabulate on it, here’s a piece of advice.
Follow a course of action, by all means, choose your time to strike if strike you must, but don’t let media jingoism guide or cloud your line of thinking. The hankering for muscular action and irrational rant on Kashmir appears to have hurt the country badly. By bracketing the Valley with Pakistan persistently and virtually running a hate campaign against the Kashmiri agitationists,  a section of the media might actually have brought both into a closer embrace than earlier. It didn’t help that this view was endorsed directly or indirectly by a section within the ruling establishment. That the Kashmir situation threatens to go from bad to worse to unmanageable – the direct result of the sense of alienation created by these forces – is difficult to dispute.
To handle the matter, the government requires a policy more than rhetoric. And every policy requires a sense of discretion. Those involved must display it by keeping the bunch of chest-thumping patriots out of the scene. Foreign policy and neighbourhood diplomacy are serious matters. The government must realise this.
(SOURCE-F.India)
=================================================

Will The Uri Attack Mark The Point Of Change Of Modi’s Pakistan Policy?

17 soldiers of the Indian Army were killed today (18 September) in attack on army camp in Uri, in Baramuula district of Jammu and Kashmir. The Indian army has said that the attack was carried out by the Jaish-e-Mohammed and that all those involved were foreigners.

The Uri attack is being described as an act of war. The Indian response, thus, has to keep in mind this reality. The only appropriate response in this situation has to necessarily be sustained & unequivocal.

India can’t meet the challenge of an unreasonable and rabid, anti-status-quo Pakistan by offering compromises and goodwill. Pakistan has to be defeated both psychologically and militarily. You don’t win against a fascist force by signing “peace in our time” deals. With Pakistan, which is dedicated to bleeding us with a thousand cuts, peace is not even an option – except for the photo-ops, which have their own value. So far the war has been fought on Pakistan’s terms; it is time to prosecute the war on more even terms.

The immediate question that follows is: what will Pakistan do once we pursue this policy? Will whatever we do increase the risks of formal war or reduce it?

No policy is without risk. India’s current stand on not doing anything has, in fact, raised the level of Pakistani ambition – leading it to believe, as it did in 1948 and 1965, that it is winning the war. “Hans ke lenge Pakistan, ladke lenge Hindustan” is still the dream of Pakistan’s delusional army.


Risk-aversion, thus, increases the risk of Pakistani aggression, even assuming this aggression is only through non-state actors.
The truth is this: avoiding risk is the riskiest strategy of them all.
(This piece is based on an earlier piece published in Swarajya.)
(Source- Via e-mail from A Sunder Rajan, Vet)
Posted by GaviniVN at 7:54 AM