The Armed Forces seem to be under siege. The adversary is neither as deadly as terrorists or enemy soldiers, nor as discernible as them. Silent, slow and insidious, the damage caused by them wouldn’t be in terms of mortal wounds or loss limbs, but the long term impact on morale and efficiency is likely to be much more damaging. The attackers are none other than people providing support and ancillary services required to keep the forces functioning and fighting fit.
A huge organisation like the Armed Forces require a plethora of support functions besides its main job of waging war or preparing for it. Since a trained soldier/officer is a resource better engaged for the latter, support cadres consisting of civilian personnel have been set up to take care of former. But as time has progressed, the imperatives of managing these cadres themselves has assumed greater importance than the actual function they were set up for.
The Military Engineering Service (MES) is a part of the army Corps of Engineers. It provides civil engineering support to the Armed Forces in peace stations. It’s officers and personnel are drawn from the Corps of Engineers. To avoid diverting too many combat engineering officers and men towards such tenures, MES started direct recruitment of civil engineers for some of these posts. Since their terms and conditions of service were obviously different from army officers, administrative requirements necessitated setting up a separate cadre for them, and a separate cadre called Indian Defence Service of Engineers (IDSE) came into existence.
Now, many years later, this cadre is attempting to subsume the very organisation it was created to serve. As is clear from the letters below, something that has a distinct unpleasant flavour of a trade union has come up amongst the personnel of this cadre. There are attempts to replace the identity of the parent organisation, i.e. the MES, with that of the cadre, shockingly sounding like attempts at secession. It would be unimaginable for any person in uniform (with whom the post occupied by the originator of the letter is interchangeable) even imagining writing such a letter. 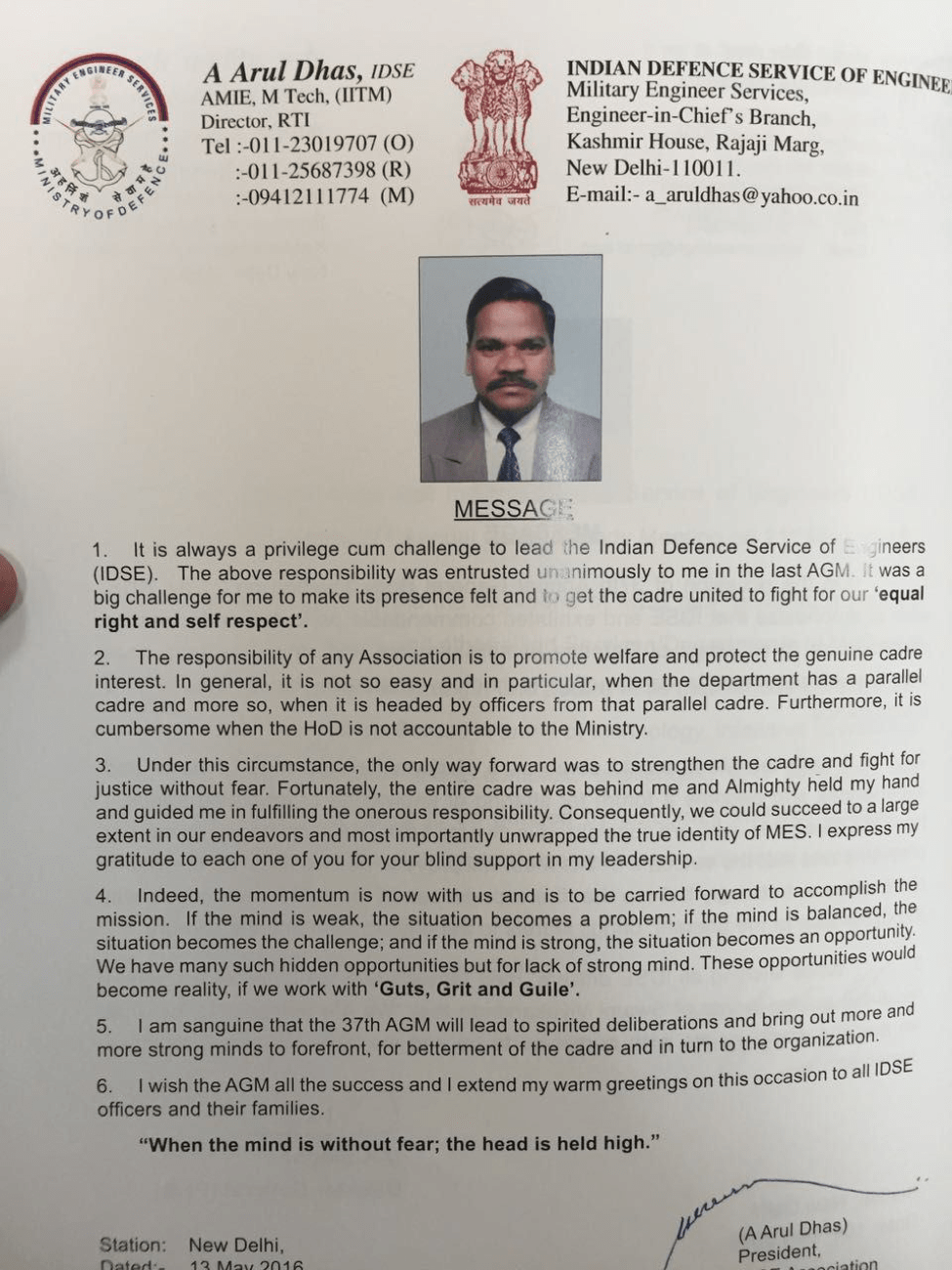 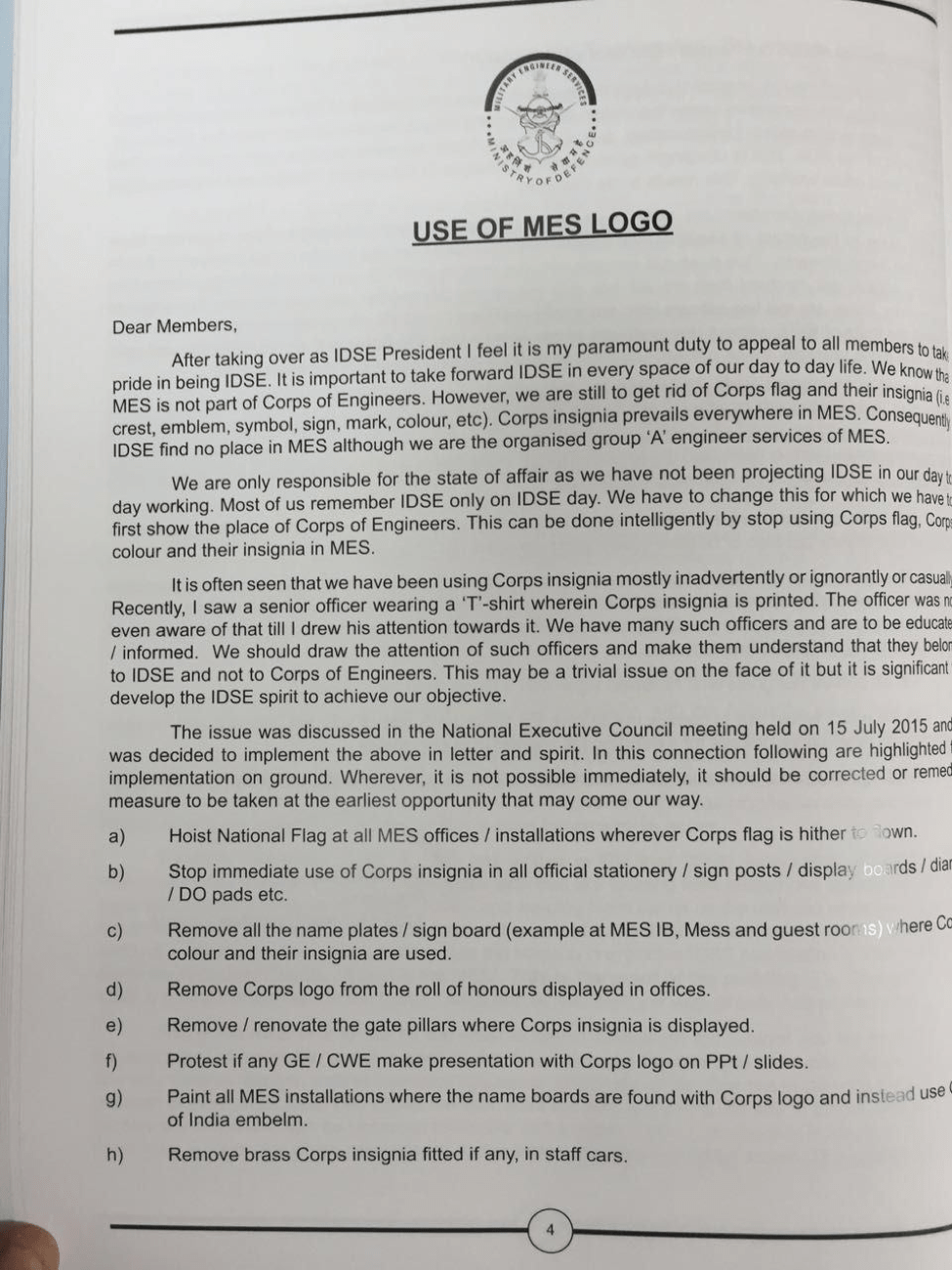 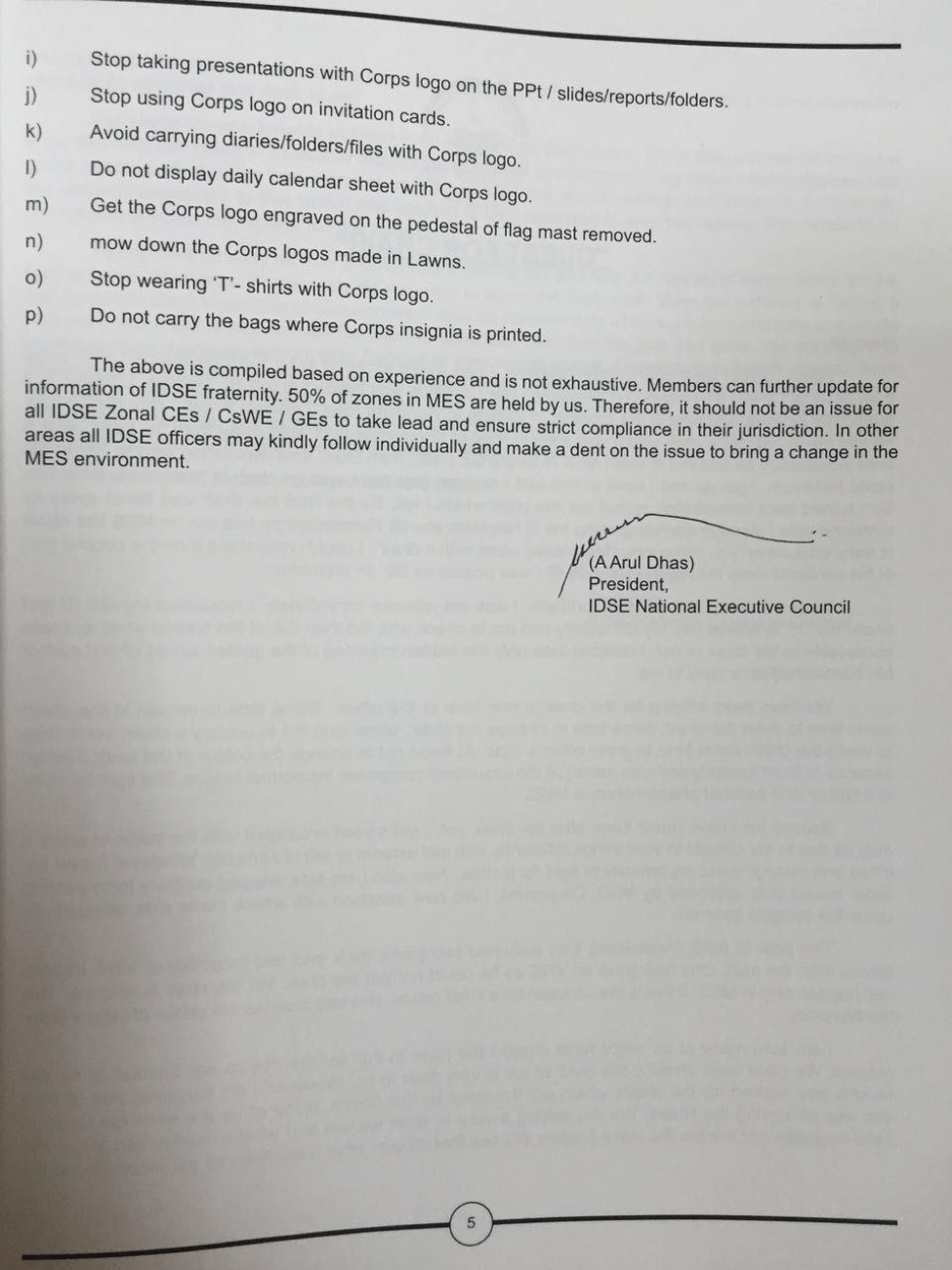 So IDSE, which began as a small part of the MES to make up for the shortfall of uniformed engineer officers, is now asserting ownership over MES, and trying to make it independent from uniformed control. The purpose behind this is clear – such a move would free them from accountability to the armed forces. Senior commanders would then no longer be able to enforce quality of service that is desired from such an organisation.
Unlike the above example, which has unfolded away from public gaze, another attempt by a civilian support cadre to overstep its bounds is in the news. This is because of the outrage caused by a letter written by the Central Administrative Officer (CAO) of the Ministry of Defence attempting to downgrade the uniformed officers’ vis vis their counterparts in the Armed Forces HQ Civil Service (AFHQCS).
The service, another support cadre set up to provide clerical and office supervisory support in the armed forces headquarters, has now assumed proportions that it was never intended to in the first place. The letter, which issues with the approval of the Raksha Mantri, lays down an amended equation between armed forces officers and the AFHQCS officers wherein the former have been downgraded one step from the existing level. As per it, a Principal Director is now equated with a Maj Gen. 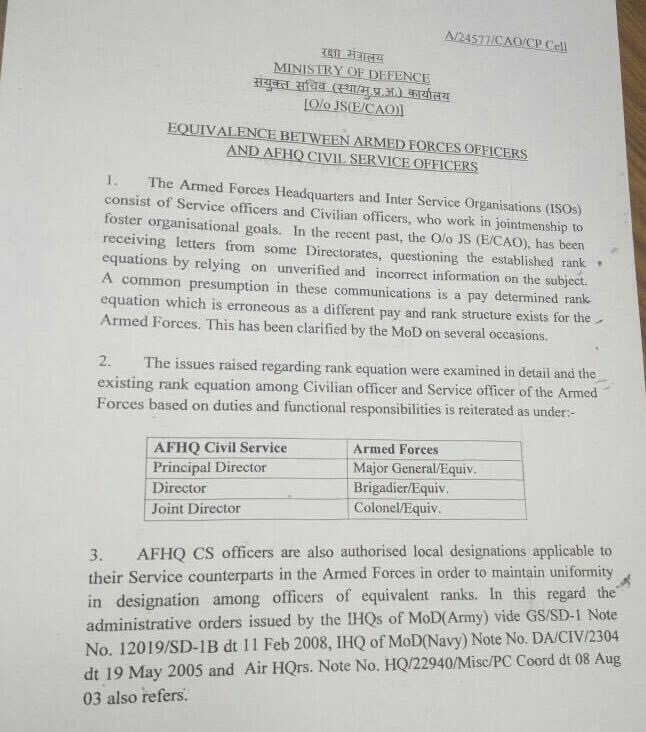 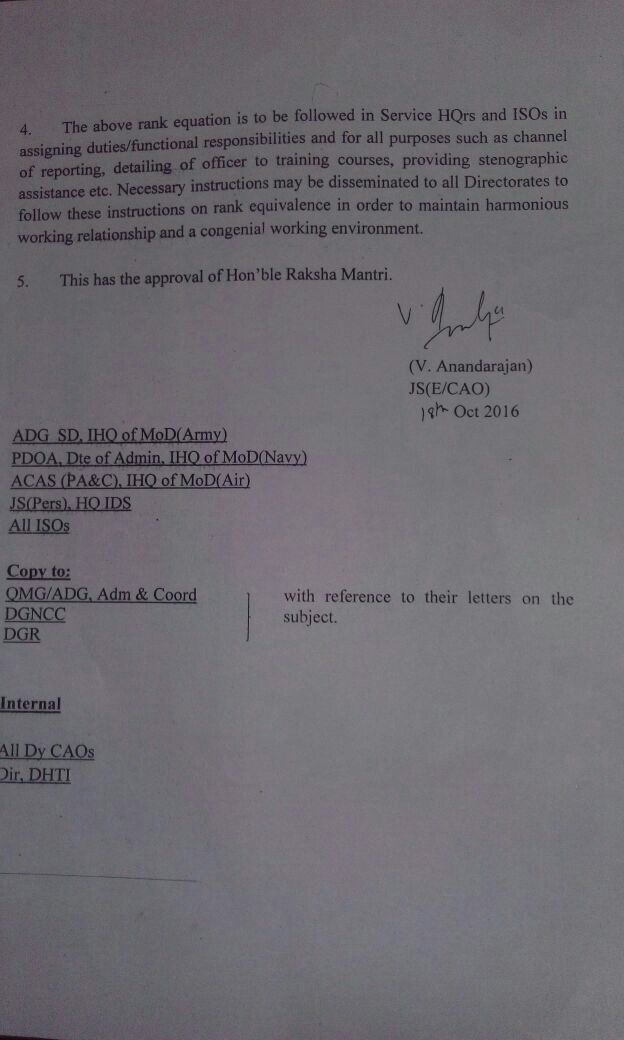 Not mentioned in the letter, but as an obvious fallout it would mean that senior clerical staff from the forces posted to headquarters would be working under much junior civilian superintendents. Although the attempted downgradation has no direct impact on pay and allowances, it’s yet another attempt at placing the interests of a cadre over those of the very organisation it was created to serve.
These are but two examples of civilian cadres under the ministry of defence. Apart from the approximately 15 Lakh uniformed personnel, the ministry pays a large number of civilians of the defence budget. These are personnel from departments / organizations like DRDO, Ordnance Factories, Defence Estates, Defence Accounts, MES and Armed Forces Headquarters staff. As per the Census of Government Employees 2011 (pdf link), this figure has grown from 3.65 Lakhs in 2008 to 3.75 Lakhs in 2011.
There has been virtually no corresponding increase in the strength of the uniformed personnel in the three services. This represents a substantial number – 25% – vis a vis the strength of the uniformed forces, and therefore a major chunk of the defence salary bill. In monetary value this share is disproportionately greater than 25% because of a higher ratio of senior posts amongst this vis à vis the armed forces. For example, it includes 121 Apex grade / HAG civilian personnel receiving the highest salaries as compared to 24 at the corresponding grades (Chiefs / C-in-Cs) in the armed forces.
What began as measures to prevent diversion of uniformed personnel to non-core functions have transmogrified into self-perpetuating organisations existing for furthering their own interests. In order to reduce the ‘flab’ and cut down the salary bill component of the defence budget, time has therefore come to take a hard look at all these organisations and cadres and prune them wherever possible.
For example, bulk of the services provided by the MES can be outsourced to large facilities management firms at great savings. Similarly, greater integration of service headquarters with the ministry of defence can ensure replacing large number of civilian officers and clerical staff.
When the tail begins to wag the dog, it’s prudent to dock the tail.
(Author Lt Col Rohit Agarwal (Retd) is an Armoured Corps officer commissioned into 74 Armoured Regiment in 1989. Rohit took premature retirement from the army in 2010 to pursue writing and consulting.)