The never ending battle for Siachen veterans and families

High Court lawyer Maj Navdeep Singh who has fought numerous such cases on behalf of Siachen veterans says, “Hopefully this tragedy would be a catalyst for change in the military and civil establishment who must realise that at times the nature can be more lethal than bullets. 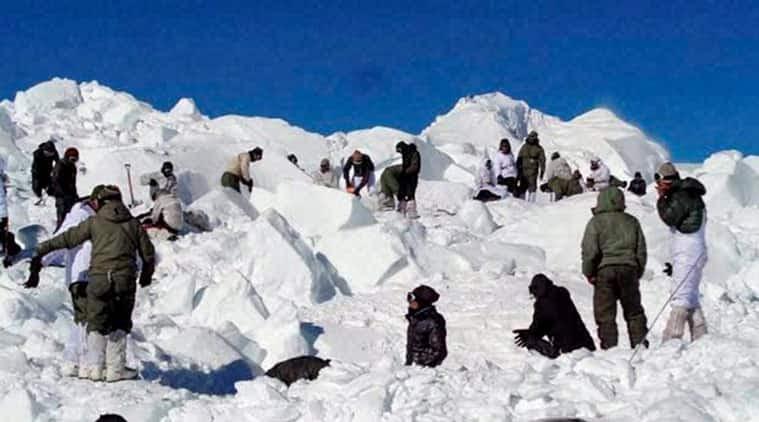 Specialised rescue teams who were carrying out the operations to search for the bodies of the soldiers hit by an avalanche, in Siachen on Tuesday. (PTI Photo)

While the death of ten soldiers in an avalanche in Siachen has once again brought into limelight the vagaries of nature that soldiers have to face in the area, yet the families of soldiers who die in Siachen or those who are disabled on the highest battlefield have to fight another battle with pension disbursing authorities to get their due benefits.

Take for example the case of Harjinder Singh, whose son Lance naik Gurjant Singh of Sikh Light Infantry died on Siachen Glacier in 2008 due to extreme climatic conditions. The liberalized family pension which was entitled to the father was refused to him on the pretext that the death had not taken in actual fighting but due to extreme weather. It was on judicial orders that the pension was finally granted but the government chose to appeal till the Supreme Court which ultimately dismissed the appeal and granted the pension.

A military widow, Harjinder Kaur, lost her husband Sepoy Malkit Singh of Punjab regiment after he suffered a heart attack in Operation Falcon just after another tenure at Siachen. She was refused the correct entitlement of liberalized family pension and she too was granted relief on judicial intervention.

In another case, Gunner Jai Lal Pal of Artillery was medically boarded out in 1989 after his fingers were amputated after suffering frostbite in Siachen. He is still making the rounds of courts to get his correct pension released while the slow moving military bureaucracy has not been able to complete the paper work even 27 years after his release.

Officers dealing with such cases say that though the rules are quite liberal and the High Courts and the Supreme Court have also strongly ruled in favour of granting benefits to such disabilities and deaths in Siachen and other operational areas, the Defence Ministry, Army Headquarters and Defence Accounts authorities routinely reject claims on technical reasons due to a textual interpretation, forcing affected families of personnel into litigation and unnecessary heartburn. Siachen veterans say that the nature is a bigger killer than bullets at the glacier and also in other tough operational areas.

High Court lawyer Maj Navdeep Singh who has fought numerous such cases on behalf of Siachen veterans says, “Hopefully this tragedy would be a catalyst for change in the military and civil establishment who must realise that at times the nature can be more lethal than bullets. We must also salute the judiciary, especially of Delhi and Punjab and Haryana high courts for always standing behind such cases”.