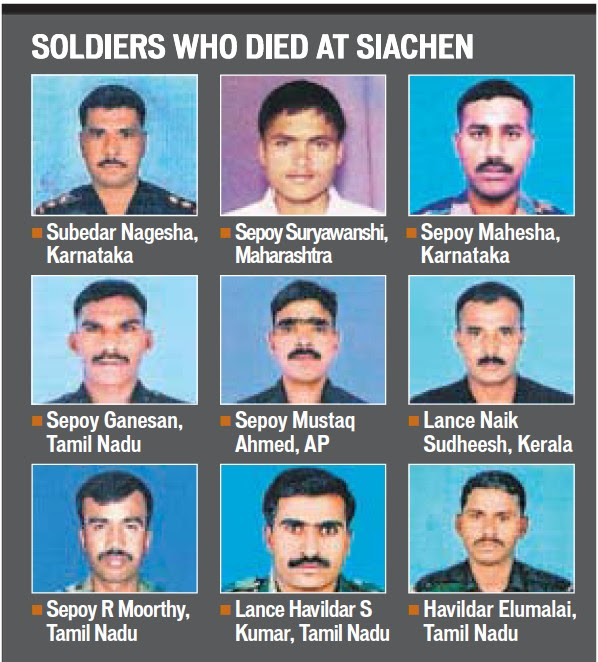 Subedar Nagesha, (Kar), Sepoy Ganesan, (TN), Sepoy R Moorthy, (TN), Sepoy Suryawanshi, (Mah), Sepoy Mustaq Ahmed,(AP), L/Hav S Kumar, (TN), Sep Mahesha, (Kar), L/Nk Sudheesh, (Kerala),  Hav Elumalai, (TN)
Ten army personnel went missing after an avalanche had struck their post at Siachen on February 3. While the rescuers had managed to extricate L/Nk Hanamanthappa Koppad alive from under more than thirty feet of snow on Monday, bodies of all the nine remaining soldiers were retrieved in the past two days. “It is with deep regret that we confirm that mortal remains of the nine martyrs, including a junior commissioned officer, have been retrieved by the rescue teams. The mortal remains, after due formalities, will be flown to their home towns as soon as possible,” said Udhampur-based army spokesman SD Goswami.

(Source- Sanjha Morcha)
Posted by GaviniVN at 10:55 AM